In no particular order


Nick C:  "Rather damp and gloomy....  ....Trudging my way back and already slightly lettuce like, I thought to check out the balloon stands for Wheatear, nada! I had just left centre copse when a strange bird appeared to my right not a hundred yards away casually flying up the centre path by the brooms. Strange gull, I mused. "***&&^%$£@@@@@@ me, a %^&@#### Stone Curlew!"


Jono L:  "I neglected to mention it yesterday as I was weeping too much, but a Stone Curlew flew over the Flats..."


Movement to my right caught my attention and the Stone Curlew plonked down into the rough grass somewhere west of West Copse. Jesus H Christ.


Jono L: "(the second one)–words cannot describe my feelings when I saw this bird flopping across the long grass in front of me"

Bob's and my bird of the year.  One I've been patiently waiting for down by the Roding as the last light disappears.  They're just down the river at Beckton so not quite as crazy as you think. When they first phoned me I was kinda indisposed.  When it re-appeared I was on my phone to my brother: "Sorry have to go Barn Owl!"  and hung up.

Tony B: "As is the norm with big twitches on the patch other birds after often turned-up but I wasn’t expecting to see a Barn Owl (the first on the patch for 25 years) dart into Long Wood" 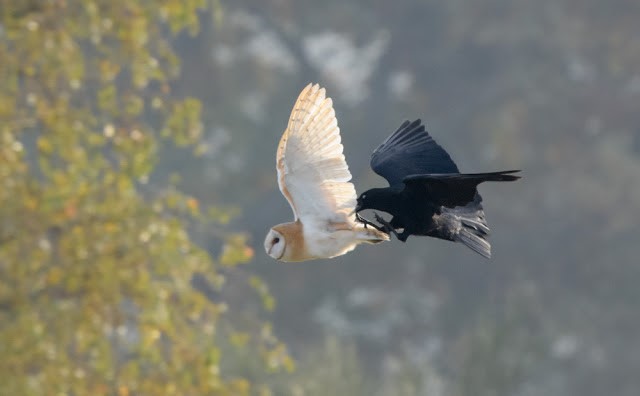 Rob S: "One of my favourite birds and good to see this a couple of times in the OSW"


Tim H:  "Watching a bird with the distinctive flight profile of Hawfinch fly into a poplar, and the feeling of anticipation, the quickening pulse as I lifted bins to eyes for the confirmation" 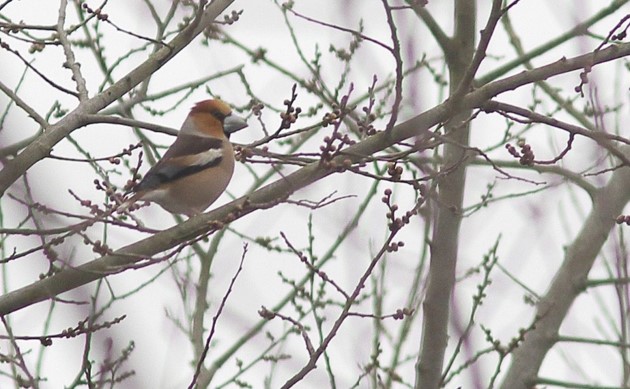 A few pairs formerly bred in Wanstead Park, mainly around the Ornamental Waters.
In 2010, a pair bred on Wanstead Flats and were present all year
1st January 2016 a male was seen by the Basin and a bird heard near the Ornamental Waters
A female (the first for many years) found at the west end of Heronry on the 17th November 2018 was still present at the beginning of 2019

James H (one of highlights over his short-time birding the patch:  "Finding Lesser Spotted Woodpecker in the Park in November 2018" 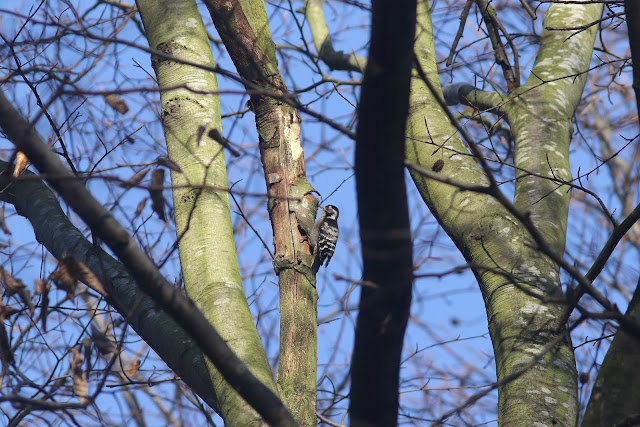 Jono L: "15 White-fronted Geese! Utterly sensational, our post-pyhllosc Albatrosses. Grey Geese are not at all common in London, and more often a winter species at sites like Rainham. To have them here is fabulous."

"15 or so birds came in from the west honking, circled Jub a few times and then departed east. It was an incredible patch moment."


James H: "... This, at the same time as the first Yellow-browed Warbler was calling!  I was giggling like a tipsy teenager"

Only 15, try 100 of them in a long line from one horizon to the other–well almost 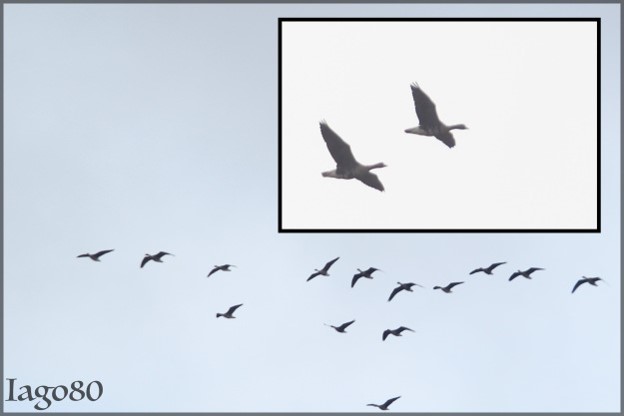 A flock of six reported from Shoulder of Mutton pond on 21st August 2010
Two flying over Wanstead Flats on 31st July 2012 in poor weather (DH).
Individual on Alex 4th August 2018.

Jono L: "This was the start of the autumn of dreams. The Egret had been in January, and it wasn't until August that I got my next patch tick, and one that was the most satisfying of all. I very nearly lost the plot when I found this bird on Alex, to the point of barely being able to type. A standout moment in over a decade of birding here, and fittingly this was my 150th"

" ... my best patch find despite being massively common everywhere. Hands shaking so much I could not type"
Tony B:  "Waders are a premium species on a land-locked patch with very little water, so to see a summer plumage bird parading around the edge of Alexander Lake was shocking & an absolute joy." 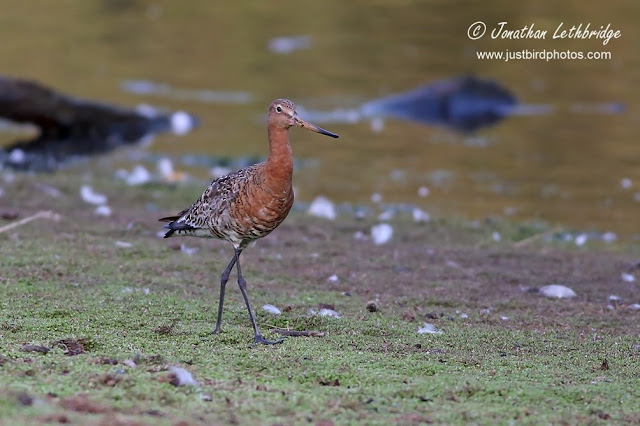 Wanstead Flats is easily the best place to catch up with these birds accounting for at least 25% of sightings in the London area.
The Birds of London (A Self, 2014),

2016: Probably the best year for Pied Flycatcher we’ve recorded with 10 reports totalling 14 birds equalling last year’s 11 records and 14 birds counted, in turn way up on 2014.  What made this year special was that 3 birds were counted on 2 separate days 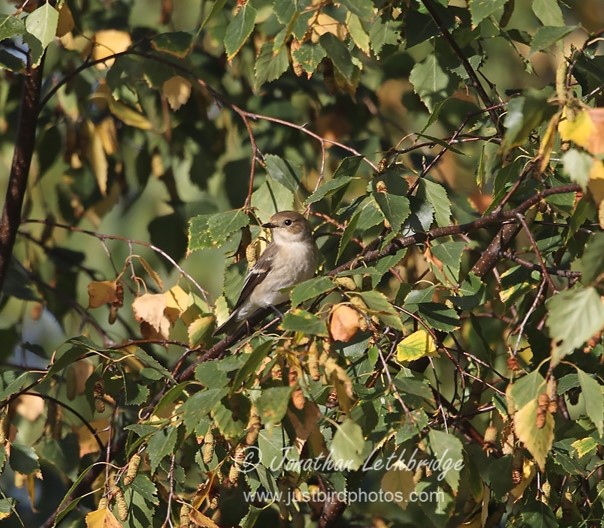 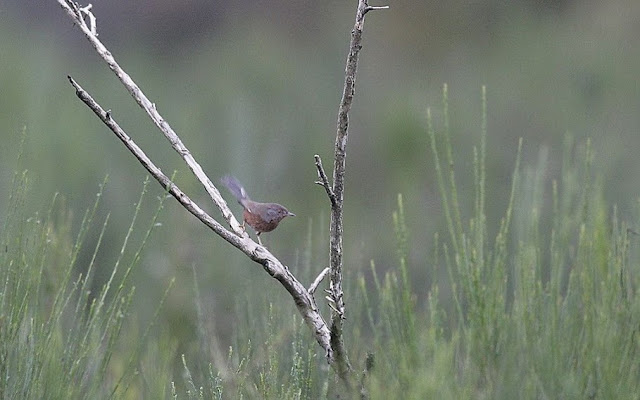 
I think it was actually my first DW, a lifer here on the patch.  Stuart F told me that he had only found it as it was flushed by a doggie, so after being good for a long time–back when time was not always on your side thanks to work, pah!–I went and made like a dog.  Bingo!  Thought I might have had another a few years back but time was my friend that day, nor my phone!

Nick C: "Arse!  Only the 2nd Smew ever to appear on the patch. Distraught, I had to have a few drinks.

There was the slim chance that it would still be there in the morning. Tim was on the case and ready to be there early doors. I was determined to be there too, hangover permitting.

I could hardly sleep with the excitement/anticipation/trepidation, which is really stupid considering I had seen 3 birds just a couple of weeks previously up the Lee Valley." 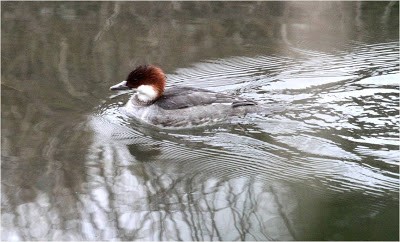 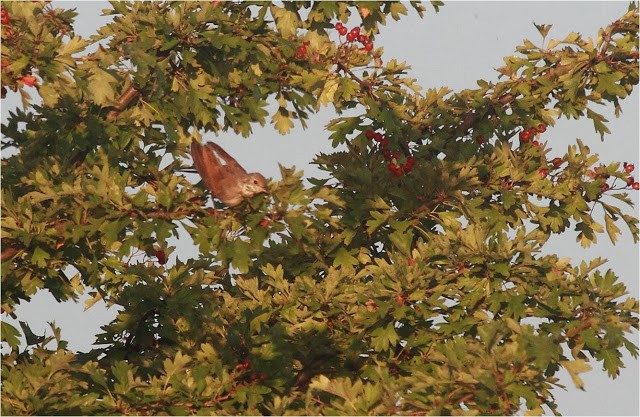 Nick C: "Oh yes, Dan and my "probable" Nightingale came up trumps this morning as it tried to shake the dew out of its feathers, on a damp misty autumnal morn. I have to admit I thought it was going to be another consigned to the bin of shame you didn't get a better ID/pic/view/go to specsavers etc. But after I managed to side-step all the vagrants it was there in all its, distant,magnificent nightingaleness. Of course by the time the posse had arrived it had finished shaking itself awake and disappeared into a large patch of broom behind the visi-mig point. I dutifully went and did the necessary and flushed three birds, I saw Bob and Jono follow the Greenfinch and the Whitethroat, while the Nightingale sailed over their heads and into the bushes by Long Wood. That's that then"