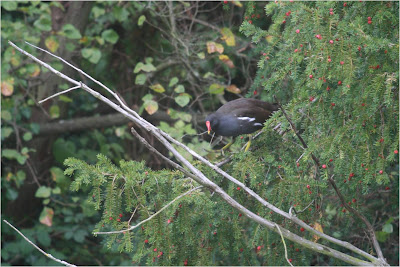 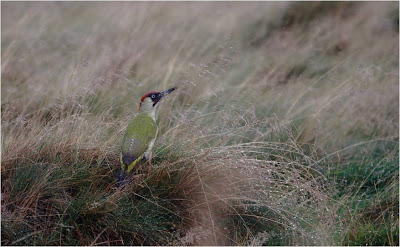 I know for a fact there are 4 birders in the UK who didn't manage to see the Sandhill Crane. We were planning to trip up there today, but the bugger offed on Friday afternoon and has now disappeared - probably lunch somewhere in France. This made me sad on Saturday and I had trouble getting up. I thought about Drain'em Marshes, but that would have probably pushed me over the top, so I watched the rugby, which made my mood slightly better, and so trolled out around 11:00.

Soon my mood returned. Stuart had got another (or the same) Woodlark again on the flats, but when I got there it was already full of other people enjoying themselves. How awful!

Got followed around Long Wood, by a fat bloke in glasses, not a fan of my prose I guessed.

With a lack of anything interesting to look at I ventured in Bush Wood, with an idea to find Firecrest, surely they must be back by now. Tower Hamlets cemetery has got them. We, it transpires don't.

I was getting pretty morose now. Alongside Heronry hundreds of Wood Pigeon took to the air and scattered aimlessly across the sky. All week I'd been noticing this activity and had searched in vain for the reason. This time the reason was all to obvious. A juv/female Goshawk soared over the tree line to the south, scattering corvids and sundry in its path. A bit contentious I know, but at least this time I had plenty of other objects to give some idea of the size of this bird. Big! Anywhere any time else I would have probably jumped at Buzzard due to its size and then changed my mind. It was big!

A minute or so later I felt a whole lot better as a Woodlark bounced down the avenue, calling! Sweet!

It reminded me of my night walk from Ipswich to see the Roller (which I didn't), come the morning Woodlark, were displaying all around me, consolation for missing the gawky blue bird.

On the way home in the gathering dark, I thought I'd check out the Alex to see if Stu's Wigeon had survived the day and had not been hit on the head with a stale loaf. In the gloaming I could just make it out. Sweet!

Sunday and I still can't get out of bed on time. Watched the end of the rugby...

Stuart was already at Long Wood when I dawdled up. He had braved the rain, but was still lamenting losing his Macdonalds through the bottom of a wet bag. 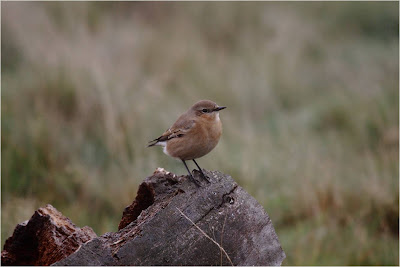 We stood in the broom field and chuntered some, as Blackbird and Song Thrush chased each other through the bushes. Stu had got the first Redwing earlier that morning, and on cue another "seee"-d its way down the wood. A Wheatear popped up on the log just close by and then we heard the unmistakable call of a Woodlark as it rose out of the grass with some mipits and a couple of Skylark. And a little later and from the same direction a beaming Mr Harris, who had picked up the bird as it flew over his head, a patch tick for him. 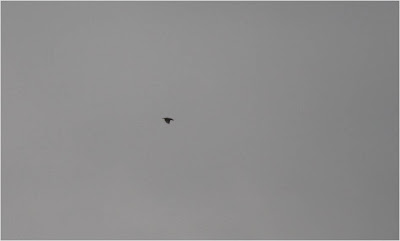 Waddya mean you can't see it
This was getting interesting. A few finches, some unidentifiable on account of their silence, a juvenile Hobby circling as it moved eastwards and the Woodlark again. Could it be a stayer? 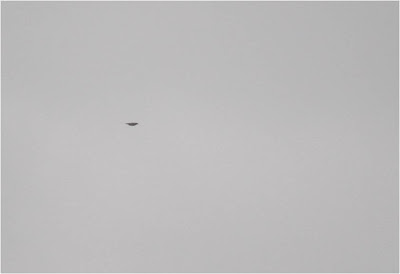 The Wigeon certainly was, and evidently one that was still in eclipse plumage; it's raspberry ripple head still to grow through. 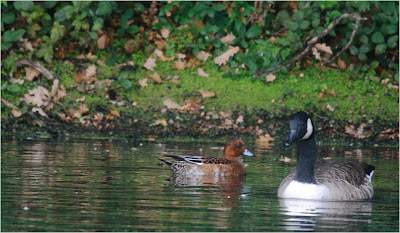 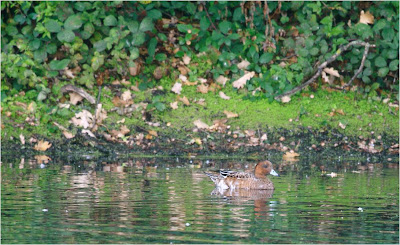 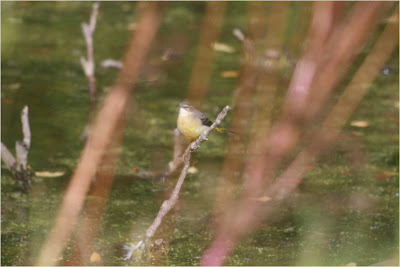 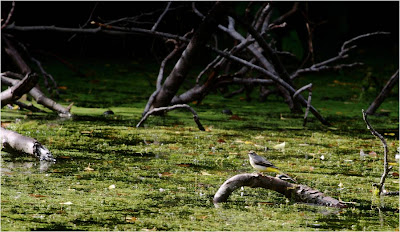 The afternoon: too many calories at the little tea shop of happiness, no Firecrest, but a showy Grey Wagtail and a busy pager it's siren buzz insisting that I consider returning to the Scillies next weekend. I am weak. 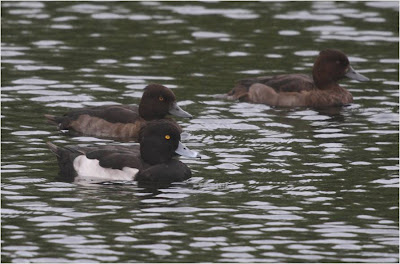