Autumn 2021: Summary and some data

Autumn - which, for the purposes of most of this brief report, is simply from the start of September to the end of November - added 10 species of bird to our patch year list (at a record 142 by the end of November) with many of our local birders also breaking their personal year bests before the Autumn was over. Monthly totals were also impressive: September = 104 (our highest month score on record); October = 90 (somewhat lower than the 95 we had last October); November = 85 (seven more than November last year) and a total of 120 species across the three Autumn months.

However, this may simply reflect good coverage and focused recording, rather than the year being somehow better than others. Indeed when we analyse our data on the autumn passage passerine migration (see below), and compare with data from previous years, we can see that 2021 was, in some other ways, poor to middling.

It feels appropriate to start with our very long staying Black-necked Grebe which arrived on Alex on 3 May (and, for those who haven’t been following our patch exploits, this was only our second ever record of this species) complete with full ‘sum plum’ golden ear tufts and then through the Autumn moulted into the more subtle, but equally beautiful, monochrome shades. It was present throughout the Autumn but was last seen on 28 November when it departed as the first ice of the season spread across the lake.

A big highlight was the first Wryneck on the Flats in six years and our fifth patch record. Jono found it feeding on the edge of the model aeroplane field by the Brooms on 4 September and it was seen by most of the locals and a fair few visitors for two further days.

The day after (5 September) the Wryneck find, a similarly rare patch spectacle came when Richard, Jono and others picked up a flock of six Curlew flying west over the Flats. I was at home (off patch) when the news came through but was able to see them flying further west over Leytonstone (just one of several locally-rare birds this year I have added to my house list but not my patch list).

The best of the rest included:

Bob’s nocmig recorder has also been hard at work this Autumn with: Redshank on 6th and 8th of September (plus another on 23 October); Oystercatcher on 7th September (also a record on 24 November); Ringed Plover on 23 October; and, Dunlin on 9 October.

In the last bird report, I covered the beginning of Autumn migration (August), but now the eBird data can provide a fuller overview of the full migratory period this Autumn.

Autumn migration kicked off with the first departing Sand Martin on 5 August and Willow Warbler on 7 August. The earliest of the ‘big seven’ (Wheatear, Whinchat, C Redstart, Spotted Flycatcher, Pied Flycatcher, Tree Pipit and Yellow Wagtail) was Spotted Flycatcher on 11 August; a pretty standard date. However, as with most phenological trends this year, most passage birds appeared to be arriving later than normal. In fact all of the species tracked in the data table arrived later than average with the exception of Willow Warbler (across species tracked they were over three days later than average).

We actually recorded more bird days than the recent average (2016-2019) for each species over the Autumn except for Ring Ouzel, but I suspect this may have been more down to strong coverage and recording. Indeed, if we just compare with 2019, the key species are all down except for Yellow Wagtail (see column four in the table). Some time I will attempt to crunch more of the historical data to give a more accurate picture over time.

Using the same comparisons against the mean over the last few years, the average day counts were all pretty similar with a few notable exceptions: Swallow numbers were down by around half on the average. More positively, Sand Martin, Tree Pipit, and Pied Flycatcher numbers were all up on average. 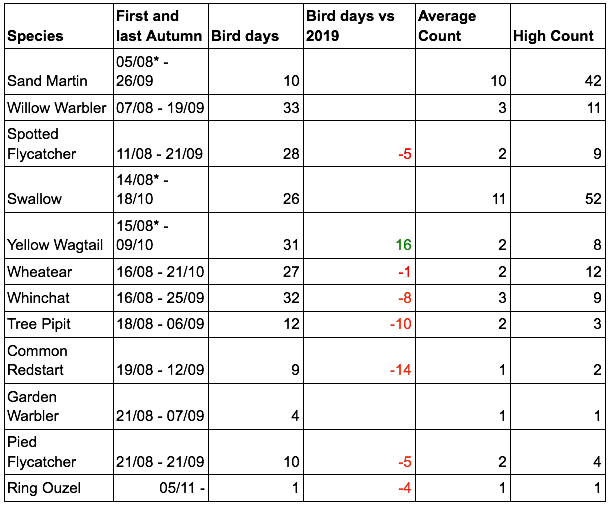