Summer 2021: 'A summary of the not-very-summery summer'

The summer lull in June bled into some more unseasonally cloudy, dull, wet and windy weather which hasn’t always been conducive to seeing perching birds. However, by the end of August our patch bird total for the year stood at a hefty 132 with the total monthly patch lists: June = 73; July = 72; and August = 98 (our highest month total ever) and a total of 103 species of bird recorded across the three summer months. Several of the local birders have already broken, or are well on track to beat, their own personal best year records.

In terms of successful breeding, we have had a couple of success stories from species which don’t often breed locally: Pochard and Reed Warbler spring to my mind immediately. It appears that the fencing to protect our tiny remaining Skylark population may have had some success and we are hopeful that at least one pair reared a brood successfully from some positive signs.

Sadly, Meadow Pipit have abandoned Wanstead Flats as a breeding location this year. Let’s hope they return. Chiffchaff and Common Whitethroat breeding success seems healthy if the number of singing (early season) and juvenile birds (late season - aware these numbers can be inflated by migration) can be anything to go by although there are signs that second broods may have been thin on the ground. We believe our local House Martins - still only found at one location - bred again. To focus on one more positive: Little Grebe numbers seem to be increasing; and negative: Song Thrush: singing territories on the Flats, in particular, seem down on previous years.

Birders often dread June - arguably one of the worst months of the year for birding interest, so it helped allay the blues when Nick found a Quail calling with its distinctive ‘wet my lips’ hidden amongst the grass in the fenced area of the Brooms on Wanstead Flats on 6 June. Even more extraordinarily it appears that there were two Quail calling the following day.

It would be remiss if I didn’t mention our long-staying Black-necked Grebe on Alexandra Pond, Wanstead Flats. First spotted by Mary on 3 May, at the time of writing, this stunning bird has now been with us for four months and attracted a fair number of photos throughout the summer and more recently as it starts to moult towards its winter plumage.

July often isn’t the greatest of months either but three fly-overs (sadly only seen by a small number of birders) smartened our list up: Mary had Oystercatcher circling Alex on 12 July before Jono had it ‘heard only’ going over his house; our first (but not last) Garganey of the year flew over Nick towards Alex but could not be re-found; and Rob had a brace of Lapwing flying North over SSSI on 17 July (our first since the huge flocks in the February cold snap).

Richard found an adult Cuckoo on 29 July - most likely on its way back. Nick also had an adult on 11 August. These were just precursors for a long-staying juvenile bird, first found by Nick on 15 August and then seen regularly since then, most often flying quickly between various different copses.

August could, of course, accurately be included in an Autumn summary given the beginning of autumn migration (more on that later), but we stick here to a simple three-full-month definition of the season for the ease of write-ups (one swallow does not a summer make etc etc).

Nick had an Arctic Tern - only our second record for the Patch - flying over and calling on 4 August and also a flyover Greenshank on 18 August. A visiting birder reported a Pheasant on 20 August (perhaps not realising quite how scarce a bird this is for our local patch).

Rob found the second Garganey of the year, on Alex, on 26 August which stayed just long enough for the first wave of local twitchers to add to their yearlists. Anyone getting there after 8am were disappointed. The following day Nick found a Raven heading west over the Flats. Jono got it from his house and I garden ticked it over Leytonstone a minute or two later. Jono and Rob also had Great White Egret heading east over the Flats on 29 August.

Curlew, Whimbrel, and Oystercatcher were all picked up on the NocMig radars while their birding masters were fast asleep so added to generic patch lists, but (*spoiler alert*) the excitement of a flock of Curlew seen during the day had to wait until September.

The reappearance of Willow Warbler on 7 August (the first since the last spring bird on 1 May) heralded the beginning of the ‘Autumn’ migratory period. Our first Autumn Wheatear (16 August) was our latest ever. Hopefully the table below speaks for itself. 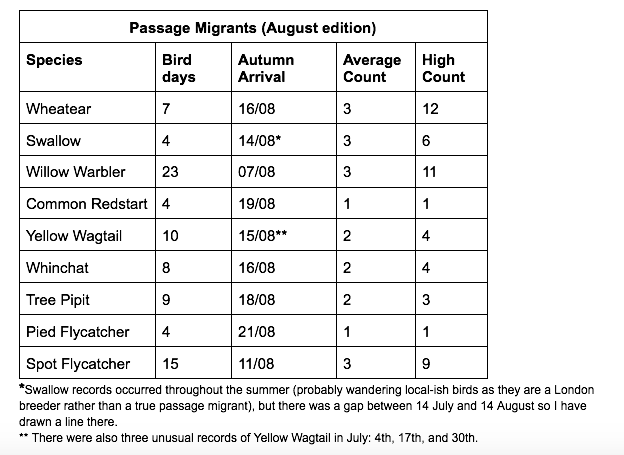 It will make sense to give a fuller picture of the Autumn passage passerine migration later in the year or as part of a full year review.