Saturday morning and the bushes were alive with birds and the rain was light. Shortly after meeting Nick east of Long Wood, he exclaimed “crake” and I turned to see a dark brown bird dive into a thicket of brambles. I got no real detail, but Nick had seen enough to be excited (see below). Steve arrived followed by Tony, but despite taping “crex crex” and as no-one had thought to bring a strimmer, it was looking hopeless. We split up and I went with Steve to West Copse to look for Thursday’s Cuckoo. It flew in front of us, when a text came through to say the Tree Pipit had been seen to the east of Long Wood so I retraced my steps. I cut across using a small diagonal path and a small brown streaked bird leapt out from under my feet. Whirring wings, dumpy, dark brown with lighter streaks – straight low flight about 100 yds to just beyond Coronation Copse and dropped down near a bush. Nailed! Must be the crake? It really didn’t fit – something else but ..., I texted “crake just flushed” (but no ?, sorry Nick) and went to get help. Errr no dangling legs, no chestnut on wings; no red on tail sides so no partridge, come to that not much tail just body and wings. We assembled and walked in a line through where I’d seen it go down. I agreed it was streaky backed and Nick was on the phone not unnaturally assuming it was the earlier presumed corncrake. A skylark flew up and I realised size was the clue. It had been about twice the size of a skylark but not really in length, more in girth, darker colour, whirring wings, no visible legs, straight flight. Had to be a quail, another mega just 50 yds from the first?! Nick came back and handed me through to Dominic Mitchell on the phone. I discussed what I’d seen with Dominic and quail was the only possibility. Our flushing sadly came to nothing. It got wetter and I ended up looking a little like this: 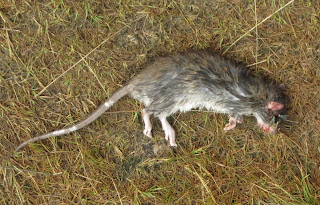 (a drowned rat). Quaility bird, but not quaility birder, I was just too slow
Posted by Bob at Sunday, August 25, 2013