Turtle Dove over the Shoulder of Mutton

While watching and waiting for views of the increasingly elusive Reed Warbler, and checking to see whether Friday's second bird was still there, I happened to glance up and caught sight of a dark dove hurtling across the west side of the pond. Looked good for a Turtle Dove, but since I've never seen one here, and my last was over a year ago, my concern was I might have been done over by a feral (which come in all sorts here). Hence my 'probable' tweet.  Later Jono texted he had a similar encounter a few weeks back while driving round the mini-roundabouts by the flats. Unable to nail it he had let it go. My views were probably better, but just needed a bit more encouragement from research at home. The trouble with most handbooks is that they show the diagnostic diamond tail with its white and black edging. Mine had the tail tucked away for speed. Some excellent shots from the Peewit blog helped, but out with Josh on Sunday confirmed by decision to go with it; 2 birds at Pegwell/Stonelees and another over our heads at Grove Ferry showed the same features to my bird on Saturday.  I am happy, and a patch tick, and tricky London tick done. 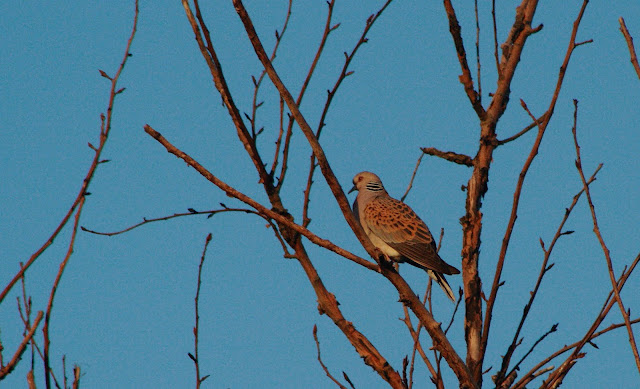