Spring '22: Whimbrel, Turtle Dove, and a Merlin too

One of the best birds of the Spring was only seen by a single lucky birder, Tim Harris: our third Turtle Dove in 12 years perched briefly near Alex before disappearing south on 1 May. Tim was also alerted by a call while inspecting his moth trap in his garden and watched a Whimbrel (our sixth sighting) fly over on 5 May.

A slightly wider audience were enthralled by a Merlin (our fifth record) on 23 April which flew low up over the Brooms, around Long Wood and then picked up pace and took out a small passerine over Centre Copse. A few more saw it again the following day.

Some other notable records:

The Spring migrant passage was kicked off, as it is so often, by the arrival of the first Wheatear; this year on 13 March. This was our second earliest on record (after 2017; 11 March) and six days earlier than our mean average first arrival. It was also the second Wheatear of the year for the London recording area. Richard found the male in the Brooms and Louis & Gosia won this year’s prestigious Wheatear sweepstake trophy; with Louis wearing black tie to collect the trophy a few days later.

The table on passage migrants should hopefully speak for itself and with a comparison in grey of spring last year to give some context. In terms of calendar days when a species is recorded, the most notable call-outs are: Sand Martin (down six); Yellow Wagtail and Willow Warbler (up four); and Wheatear (down four).

This was the second year we had the benefit of the Skylark fencing. An organised Skylark count in March revealed 11 birds on Wanstead Flats with 4-5 males regularly singing. There was evidence of successful breeding with at least one pair feeding young, although there was also sadly evidence of possible predation of one nest.

Meadow Pipit was last recorded on 29 April and whilst we still have healthy numbers through the winter, this is the second year in a row that this species has not stayed around to breed locally - I didn’t hear a single Meadow Pipit song this Spring.

Reed Warbler have popped up all over the place during the Spring, but the most reliable singing territory has been by Shoulder of Mutton pond again - although only one male this year. There have also been at least one regular singing Cetti’s Warbler on the Roding in the Old Sewage Works.

Our Spring high count for Song Thrush was 17 birds across the Patch but this may have been swelled by local or wider movement and the number of regular birds holding territory is closer to half that number. 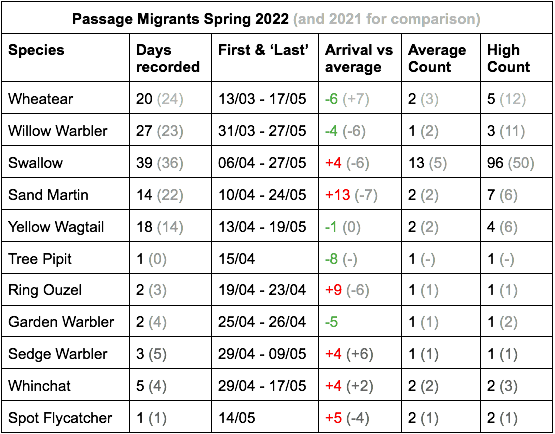