A new year, a clean slate. Now that I'm dry I feel up to telling you about it - the latter half of the festivities was extremely wet, but ultimately extremely productive. Last year we got 56 species; this year we blew that away with a final total of 63, including such Jan 1st gems as Peregrine, five Bullfinch, 2 Great Black-backed Gulls, Little Egret and Firecrest.

Nick, Tim and I (hi, yes, this is JL, with a guest appearance...) started off in the SSSI, which is where we got the Peregrine, probably one of the Stratford birds, which although close, we very rarely see. Buoyed by the top start, pretty much the next bird was a slow and lolloping GBB Gull, another rare visitor, and mostly as a flyover. It was therefore a big surprise to find another on the deck near Alex, though we managed to look through it for about five minutes before we twigged. 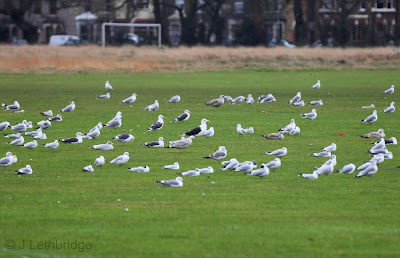 A few Teal on the Alex, and we left the Flats on 47 species, missing only Reed Bunt and GS Woodpecker. The OSW rectified those particular ommisions, but unfortunately didn't produce any of the actual birds we were hoping for. Nevermind, on 51 species we headed for the Dell, which had Siskin ready and waiting, in contrast to last year when we didn't get one. Tea and cake at the LTSoH, via a Water Rail at the top of Perch, and then it was Firecrest time in Bush Wood. Hard work, but we each got a view in the end. 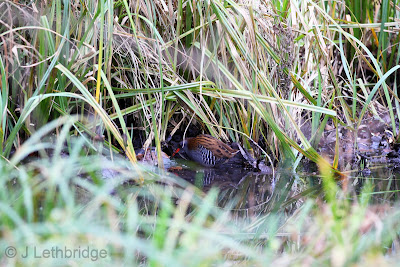 That's when the rain set in, and boy did it set in. In fact it's still raining as I type this, and most of my clothes are still wet. Tim caved and went for lunch, and Nick and I manfully carried on. First stop the Basin which didn't have the hoped-for Great Crested Grebe but did have 8 Egyptian Geese, and then a fruitless and muddy tour around the Ornamental Waters. Arriving at the OSW again, Nick forced me to go around it again. Lucky he did, as this time we got the Bullfinches, the Little Egret, and a bonus Chiffchaff. A quality start. Where were you all?!


PS, in IE, our list of birds etc does not show on the right of the blog. To solve this, use a decent browser like Chrome or Firefox, or click on the blogpost title (ie "And we're off" today), which should bring it up.
Posted by Jonathan Lethbridge at Sunday, January 01, 2012