At 10-45 on a drear grey Monday morning my phone goes off, but it's upstairs. I get there too late, of course, but phone Tim back. "I've got a Great Egret on Perch!" "Immense!" I gasp. "Have you got a camera?" he asks. A few seconds later and I'm there. The Egret has moved to the North side and is standing there looking, well, immense. The yellow bill, the sinuous neck, the white, all that white with black legs. I fire off a few shots and realise I have forgotten my specs. I fire off a few more. Tim is Whatsapping  and Twittering out the good news. 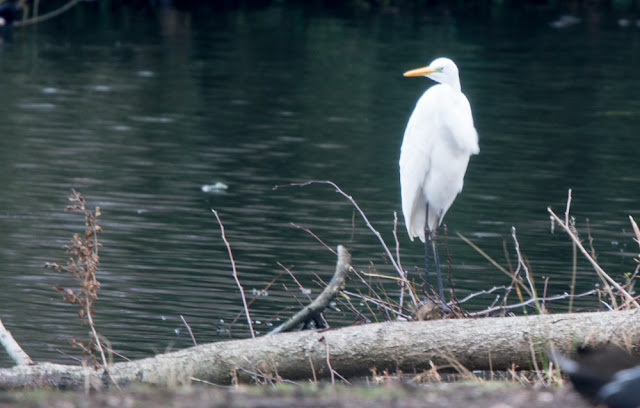 I warmly and effusively congratulate Tim who is rapidly replacing Nick as bird-finder general. An unexpected Mediterranean gull distantly on the Basin on the 3rd and now this. The first solid-gold Great Egret on the patch, although there have been a few claims. A patch tick for all, let's hope it stays for the vistas (thanks Tony). Birds don't get much better than this.

All very lovely, so Tim and I leave. Oddly I seem to hear the screech of brakes distantly from Heronry, hmm sounds like an Uber taxi that has been hired in haste. However I proceed to the Basin where Tim (natch) has found the first 6 Wigeon for the year. Strangley, a taxi seemed to be just behind me as I left the Basin. I must have been hallucinating.

Well, that was a great filthy twitch, and cost me very little.

PS When I got back I realised that I'd been taking the shots on ISO 400 which is pathetic for a 300mm with 1.4 extension these days.  Note to self: always pack your specs and check your shots so that they will look half decent.
Posted by Bob at Monday, January 08, 2018