Time for a new year 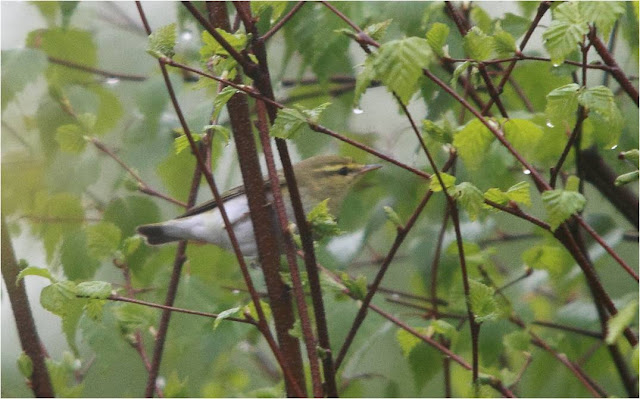 This year's bird of the year: Tony B's singing Wood Warbler (25th April), on a wet morning in the SSSI

I am bored of this year; the constant south westerlies, the mild weather, the lack of warblers, the lack of cold, the lack of holidays left so I can avoid work. So I declare tomorrow will be a new year–it should have been on the day of the solar new year, but that would have meant I was bored of it already.  Luckily quite a few people agree with me, so that's settled, tomorrow the show kicks off again!

Tomorrow Wanstead's finest will be out early, using all their skill and finesse, to tick of Robin at just after midnight and the usual fare that doesn't get a mention at any other time of the year, some 60 species (perhaps!).  Last year was brilliant, I lasted half an hour before being called upon to go and twitch a Little Bustard and a Blyth's Pipit somewhere else. This year I see no impediment to a joyful day birding with my buddies...

Talking of whom, what did they make of last year? Well we all got new birds for the patch, some of us UK lifers.  The patch continued to surprise and disappoint, but all in all none of us can grumble too much. 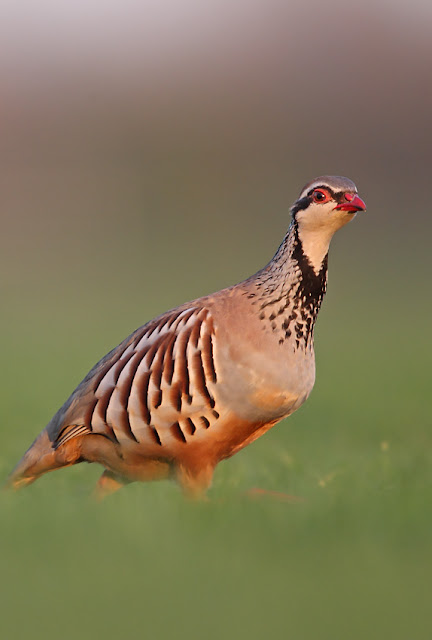 
Jono liked the Red-legged Partridge very much and voted it his bird of the year (see his travel blog for the reasons why).  He predicts Cetti's Warbler (last and only record from 2008), so not really going out on too much of a limb there–they are now at Redbridge Lakes, Walthamstow and even Hyde Park had a singing bird and if the winter continues to be mild we'll be knee deep in them–so got to be on the cards, soon! His best occasion was finding Firecrest and then Bob soon afterwards in some kind of teleportation event thing! 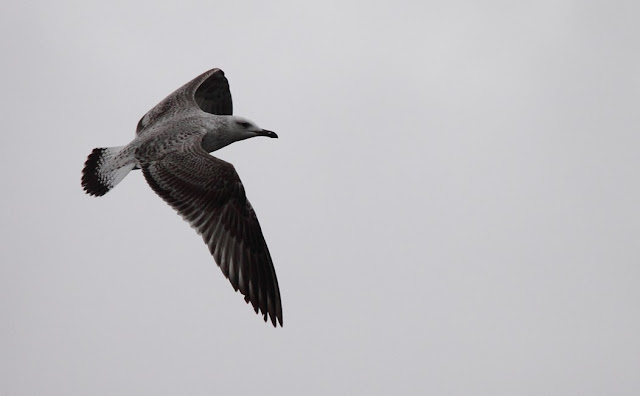 Talking of "Caspo" Bob, his best bird was "that" gull, which is hard to disagree with since it gave soooo much pleasure to us all! Worthy of a mention was the Grasshopper Warbler, reeling in the Old Sewage Works one April morning, which wasn't doing much in the way of singing when Bob got there and had to refind it with Mr Fisher. His best occasion was the relief that one of his blockers, namely a Black-necked Grebe wasn't but was a Slavonian instead (not as the finder had mischievously put it out as to get them all running!). Bob's prediction is for a shrike, which I think he went for last year–it's getting closer Bob!

Tony B went for his find of a singing Wood Warbler in the SSSI on an entirely miserable morning in April. A great find and a great bird, which drew an appreciative audience (including the old bill) during it's two day stay. His occasion was a sky full of hirundines on another bleak morning on the flats, thousands of swirling Swallow, House and Sand Martin–a truly awe inspiring spectacle. He would like a Dartford Warbler in the brooms having missed the last one, though on his blog he's gone for Sub-Alpine (Moltoni's if we must!). 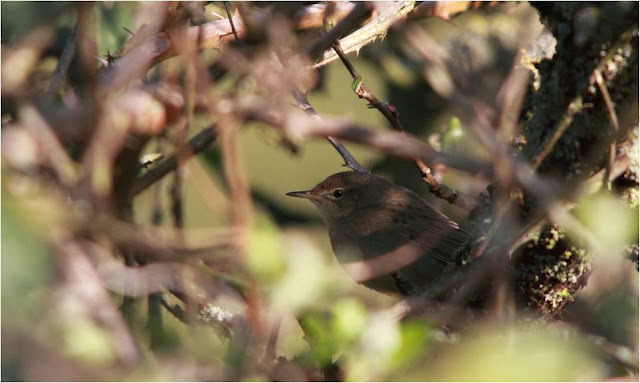 Marco J, who wisely only was to be seen at the right times of the year, agreed with Bob on the Gropper and went for chasing Golden Plover, in the fog on his bike, as his event.  Like Bob he's gone for a shrike, namely a Red-backed one–he'll need his bike for that one, unless he finds it! 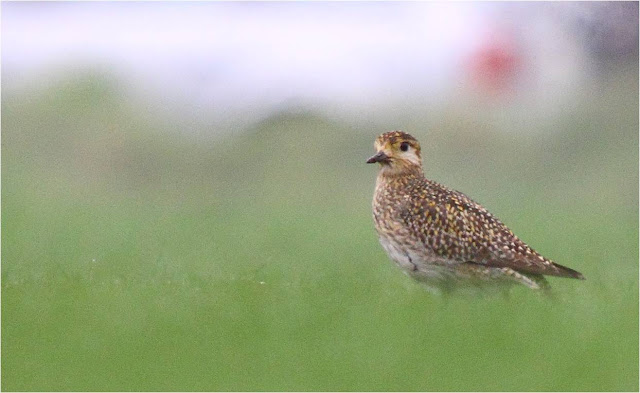 Golden Plover, fog grounded on the 9th of April

Tim H, found the Grasshopper Warbler and rightly has it as his best bird, a truly stonking find. Got to love the song. Another singing warbler claims his best occasion spot: the singing Wood Warbler in the cold rain in the SSSI. Tim would like an Autumn Long-eared Owl, if he could be slightly more specific I will make sure I am there too! 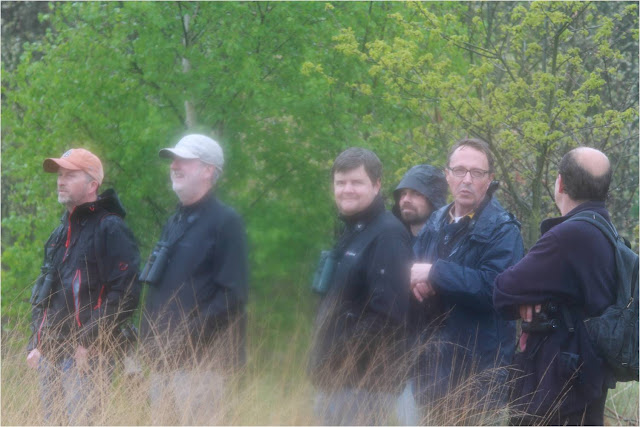 The Wood Warbler twitch sited by many as "The Event" (Left to right: Tony Brown the finder, Caspo Bob, Jonathan-how the fuck did you see so many birds-Lethbridge, Dan Hennessy, Tim Harris, Stuart Fisher)
Dan H, now exiled to the Devon coast (poor bastard), asked if he could still play? Of course. He went with the Partridge and agreed with Tim on the Wood Warbler twitch, while predicting a Black-necked Grebe, but only if he can be there to see Bob's face when it happens.

Richard R went with the Wood Warbler as best bird, while his occasion was the occasion of the 30th August when the enclosure was stacked full of migrants (a Wood Warbler there too!).  Optimistically he goes for Black Tern, then completely ruins his chances of that ever happening by stating it will be on Jubilee! 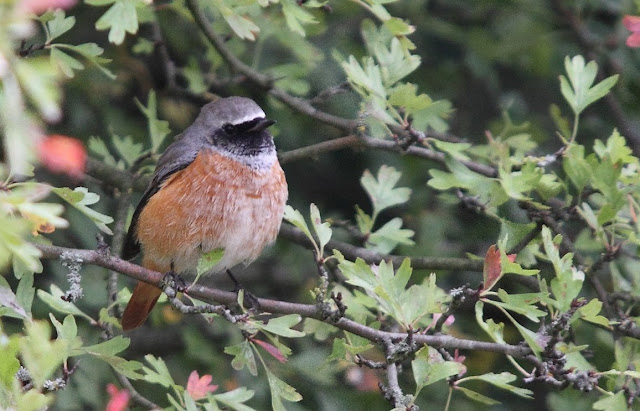 Common Redstart from the 30th August in the enclosure

Stuart F also went with Wood Warbler (I sense a trend here!) and goes for a Great Grey Shrike.  You may have to come and find that for us while you are at it!

James H, in his first full year of Wanstead Birding, chose the Slavonian Grebe (at last one of mine!), but was most pleased with the Wryneck and Ring Ouzel. His best occasion finding Jono's Firecrest in Bush Wood, just hours of seeing the two in Long Wood. He predicts a spring Osprey, which would be a shame as he'll be at work! 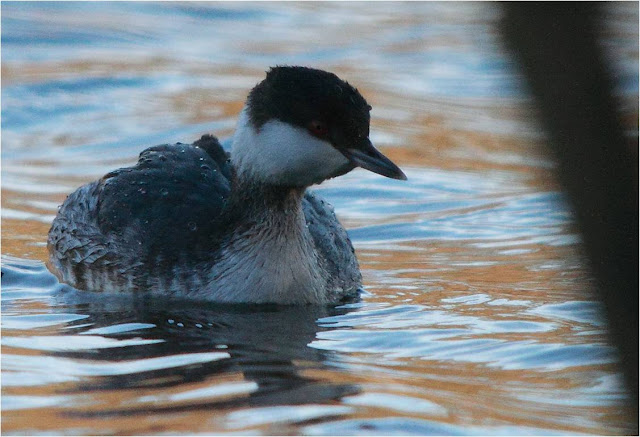 The biggest draw this year, the Slavonian Grebe

Which just leaves me as no one else has responded.  I can't fault any of the above and would largely agree that a singing bird is better than one that doesn't, so Gropper and Wood W are up there for me, but to hear a singing Whinchat was something special and something you are not likely to hear in London that often, stunning bird and beautiful song even if it was quite subdued! Special too was the SEO perched up in the brooms, the Wryneck, the numerous Redstart, always Pied and Spotted Flycatcher, the Slav, the calling Woodlark, the Ringed Plover flying across the Fairground and of course Barry's Partridge. Better still having a Black Kite circling over the Old Sewage Works for about 10 minutes without the intelligence to get my camera out the bag, but my bird of the year has to be Bob's Caspo (just let's forget the cock-ups afterwards–I am allowed one a year!). Having said that I am minded that too many of our birds we just take for granted.  Today I watched a pair of Peregrine calling as they flew over Bush Wood, how lucky are we to have them! I saw three Skylark and was happy, but how long will they last here? My best occasion–there were many but never enough and those were ones shared with my patch co-workers and others.  Here's to many more of them.

And there's the little matter of the birding scores on the doors.

Ooh I won!
A certain Jonathan Lethbridge, somehow, came second on 115, pipping Bob by one (there is no justice), Dan H came fourth while only being here for eight months (105), Tony B came an admirable fifth on 104, while newbie James H did a very promising 98 in his first full year. Tim can claim moths as a distraction, while Rich R can blame the products of reproduction for his slide down the table.

Let's do it all over, again!