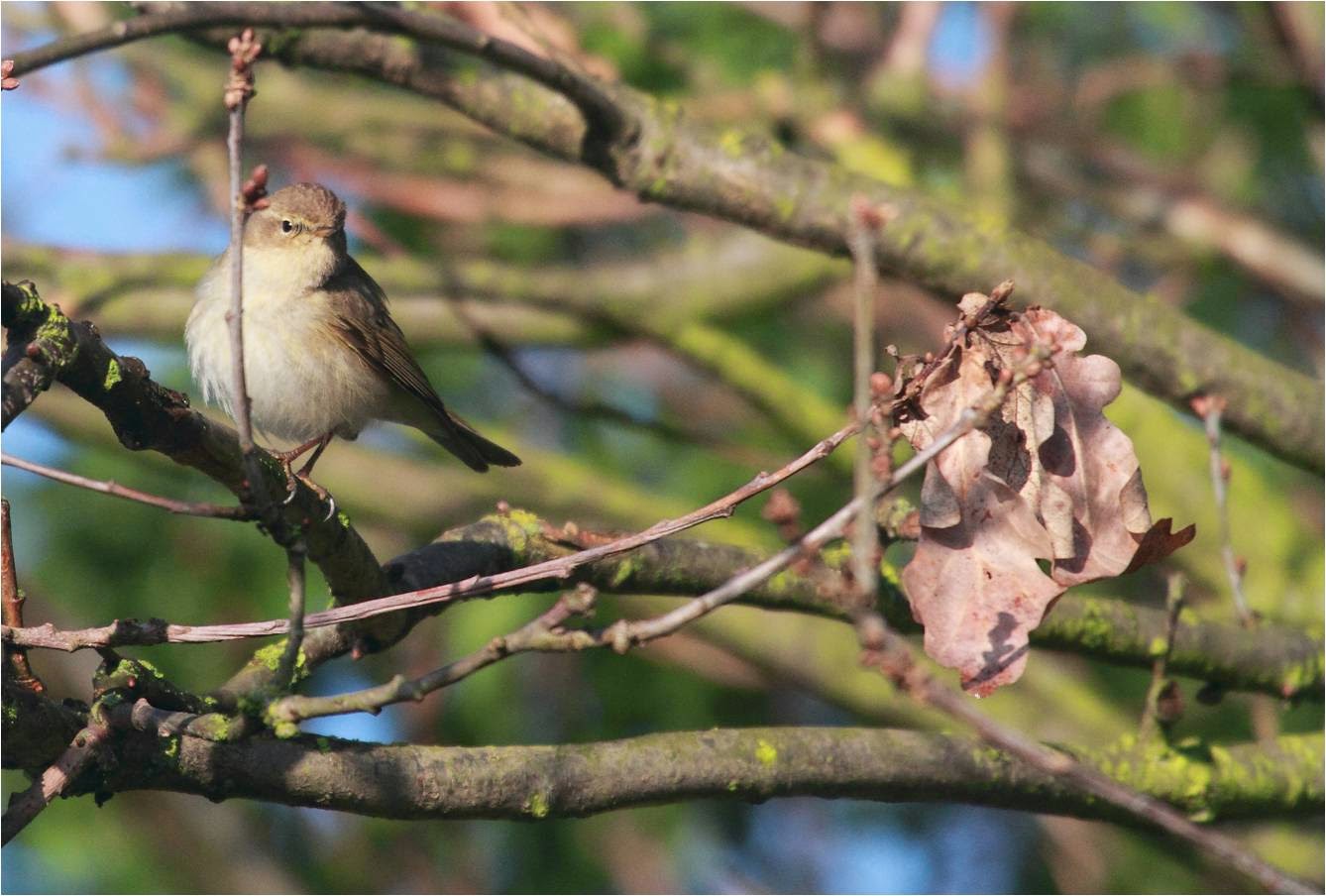 With not a lot happening migration-wise, it's been hard to muster up any enthusiasm to blog and it's getting harder to get the enthusiasm to go out and look for something to blog about.  A few singing Chiffy, Blackcap, Skylark and Mipit, the Wheatear were smart and tantalisingly non-co-operative, but they've hoofed it and so we wait.

There's always the City Corporation though!

Two weeks ago the Corp finally got round round to erecting the promised sign posts, which lack one vital ingredient - signage! I tweeted about it, which prompted a reply from one of the forest rangers stating that the signs were on their way and that he would be available to discuss matters at the weekend as some people were concerned that things had gone too far already!

During the survey period, where Tim dragged a representative from the Corp. to work out where best to put these posts, the issue of lines of sight was raised!  Incredibly a few posts could ruin peoples appreciation of the plastic bag-trees, clear views of drunks around Angel and the Jubilee pond,  and detract from enjoying the behaviour of the strange men round Long Wood and in the brooms there.

So who could these mysterious detractors be? Lets consider the options:

The drunks
The rough sleepers
The doggers
The fly-tippers
The general litter droppers
Muggers
Footballers (see also litter droppers)
The model plane enthusiasts
The treasure seekers (a new interest being catered for on the flats, bring your metal detector and dig holes)
Canoodling Asian kids
The plant and fungi harvesters
Migrating traveller camps
Kite flyers
The people who bring car loads of rotting bread and other unsuitable food-stuffs to feed the ducks and pollute the ponds and help the burgeoning rat population
The religious sects who bring unsuitable foodstuffs to litter around the ponds in deference to their gods
The loud picnickers with their barbecues
Other firestarters
The joggers (oblivious to the world around them behind their earphones)
The cyclist or pedestrians
Bird watchers
Or any other of the users of the flats

That, I think, about covers it.  A definitive list of activities, of which most are illegal under the corporation's own rules.  So hardly likely that any of them would be complaining "you've gone too far!"

Let me make it clear there are good dog walkers, who know what a Skylark is, and are probably a member of the WREN Group, or the Friends of Lake Hall Project, and then there are the others who would rather the world went to hell before they would countenance changing their doggies right to crap on a mipit.

Of the two I am going to stick my neck out and say, without any prejudice what so ever, it might just be, probably the second lot who are whinging.

Obviously their wishes come before the Corporation's own environmental obligations as set out in their mission statement.  We are indeed truly fortunate to share the same ground as these wonderful animals, and of course their owners.

Skylark (Red status: Its recent and dramatic population declines make it a Red List species)
Meadow Pipit (Amber status: Meadow pipit numbers in the UK have been declining since the mid-1970s, resulting in this species being included on the amber list of conservation concern)
The Domestic Dog (Numbers increasing. Growing evidence to suggest that there is a correlation in the increase in the canine population and the decline of ground nesting birds, such as Woodcock and others due to disturbance in the breeding season) http://grumpyecologist.blogspot.co.uk/2013/02/woodcock-on-wane.html

Only going to be one winner here, can you guess which one?  Here's a further clue: Two declining birds species known to breed on an east London site couldn't stop the area from being cleared ready for a huge housing development as trumpeted in the last budget (not all bad news: there will be parks created for you to walk a dog - that's mitigation, that is).

So what's to be done? The signs when they do come will largely be ignored as they have been in the past, and probably destroyed as have some of the bridleway posts have already, as in previous years.  Calls for some kind of fencing cannot be countenanced.  The birds will just have to fend for themselves: this obviously hasn't worked in the park or on Leyton flats where there are no more Skylark, but the Corporation obviously have high hopes for here!

The problem is that there is only one really good area for the birds to breed, with copses splitting other areas making them more marginal.  Here's a thought create a wide enough patch of rough ground to link the main area with that of the Alex and pub scrub, which might in turn encourage expansion!  It might mean the re-positioning of say 8-10 football pitches, but there is room to accommodate that (brick-pits field and to the west of the northern changing rooms), it would save hundreds of man hours on mowing. Money saved! 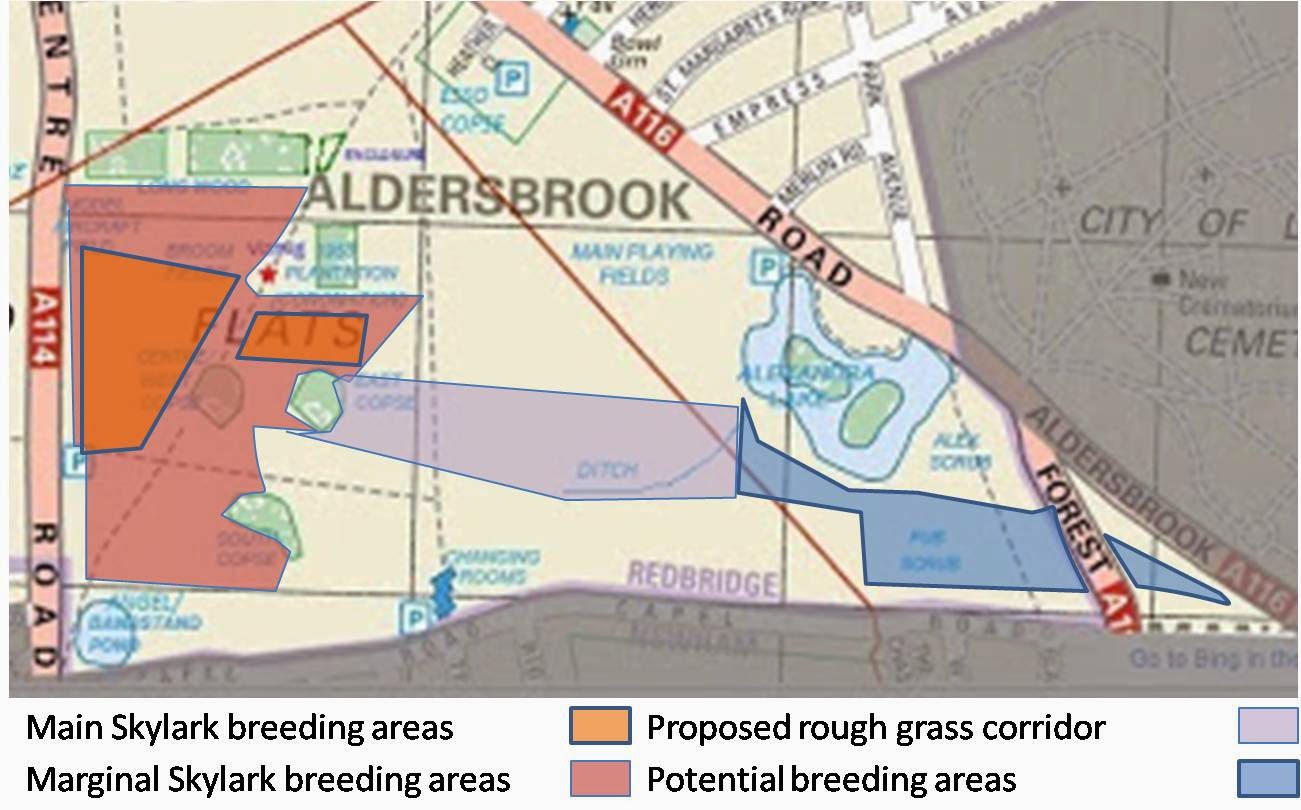 A living landscape!  Something that's all the rage with local wildlife trusts, the RSPB and right minded councils.  Has it got any chance?  I should cocoa!

Perhaps we should follow the route of it being a requirement of the increasing dog population and their needs.