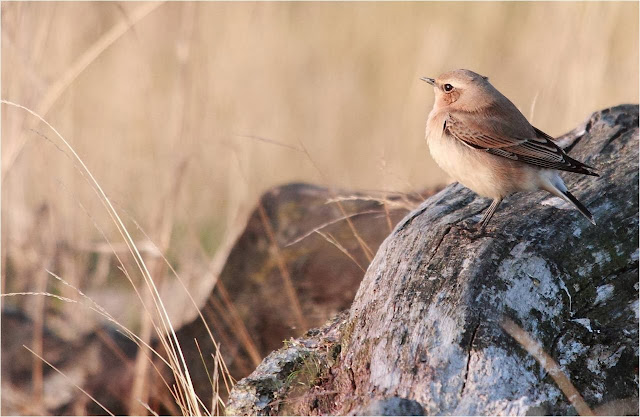 The winds were right and it rained over night. There must be something out there? We needed a bit of a pick-me-up from a good bird.  A Wheatear yesterday was good, but then you realise how few there have been this autumn.  That's bad.  Two or three today.  That's good.

Dan got a small flock of Redwing.  Again good, but obviously not as good as a Wheatear in the patch top trump game. Yellow Wagtail too, but their worth is greatly diminished by the fact their hard to find in the sky and so as a result not so good. So Bob and I with the last throw of this weekend's dice trooped off to the Alex.  We didn't expect much and got less.  A Reed Bunting called once, three Skylark over, so then it was up to the ducks to make or break the day. I had all but given up as we did the return loop round the north side of the lake.

I was happy to see that Sticky (the Canada Goose with angel wing, our favourite goose) was not the victim of the goose butchery, the feathery remnants that were scattered around the football pitches. So I told Bob. He replied he had just had the Wigeon pop out from under the willows and then sail back again.  This was the luck catalyst.  As we scanned the overhanging trees at water level I soon got bored and re-checked the gulls.  I picked up a crow chasing round the corner and what it was chasing was a small wader.

A snipe. Then it did something very peculiar. It landed in the ditch by the car park just a few yards from where a game of football was going on. Now that was interesting.

Certainly small enough, not calling and all things considered a short bill and behaving the way no self-respecting Common Snipe would.  Jack Snipe we concluded, now the problem was how to work this.  Obviously there would be one or two patch twitchers eager to get this on to their year list.  So I sent a group text out and waited for the response. Almost immediately one J Lethbridge texted "on way".  Dan unfortunately had just reached home and now had to leave promptly, leaving a baffled  wife now probably concerned over the sate of his mental health, if she wasn't already.

While we waited a corner was awarded in the football game right next to the snipe ditch. We could see this going badly if the ball was headed out our way.  Luckily it was hoofed up pitch, but as Jono arrived the keep fit crowd walked en-masse along the touchline again yards from where we thought our bird was. Nothing.  I was getting a bit worried now, perhaps we too had taken our eye of the ball and the bird had done a bunk.  We were set to look pretty stupid. All set we walked along the ditch and found nothing and now began to look pretty stupid.  I went back and started down the ditch again and promptly nearly trod on the bird.  Off it went, not high and out of sight, but straight to the ditch on the south side of the Alex.

This time we waited for Dan. I suggested walking wide of the ditch just in case we could get shots of it on the ground.  And then  promptly flushed it again. This time we got some record shots as it plunged back under the trees on the eastern island on Alex - probably where it had been all morning. 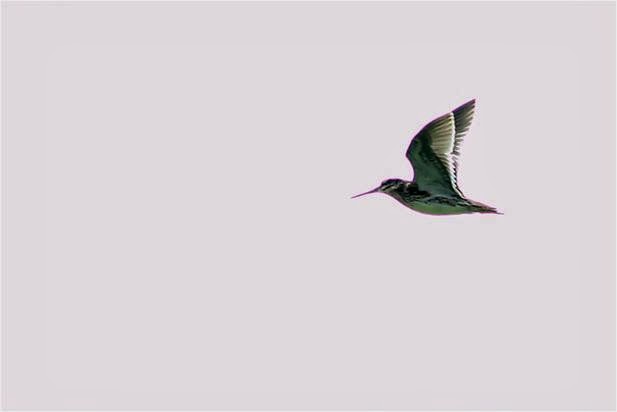 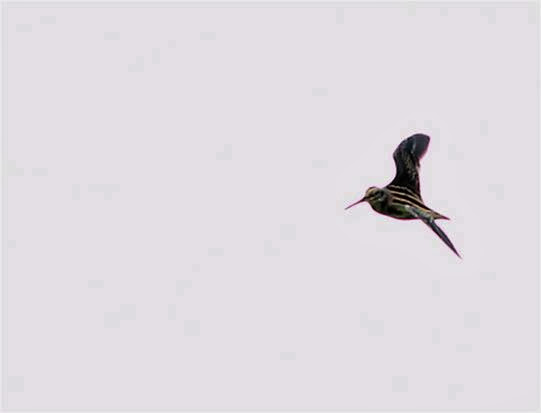 Not the bird we had expected to be the addition to the year list, but our second in two year's (though I have my suspicions that we probably have had more - I nearly trod on a small snipe a couple of year's back in the boggy bit of the SSSI which looked good for one).

So the weekend saved by a Snipe!