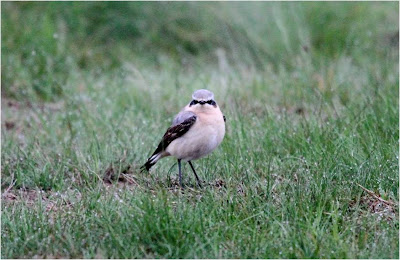 Did you know that April starts on the same day of the week as July in all years, and January in leap years and ends on the same day of the week as December every year. Wow! and there is more: "The derivation of the name (Latin Aprilis) is uncertain. The traditional etymology is from the Latin aperire, 'to open,' in allusion to its being the season when trees and flowers begin to 'open,' which is supported by comparison with the modern Greek use of ἁνοιξις (anoixis) (opening) for spring. Since some of the Roman months were named in honor of divinities, and as April was sacred to the goddess Venus, the Festum Veneris et Fortunae Virilis being held on the first day, it has been suggested that Aprilis was originally her month Aphrilis, from her equivalent Greek goddess name Aphrodite (Aphros), or from the Etruscan name Apru. Jacob Grimm suggests the name of a hypothetical god or hero, Aper or Aprus*."

This blog informs (if only through plagiarism).

Last year we were on 113 come the end of April, this year just 104, and we thought last year's spring migration was rubbish...

While some birds were a little tardy in their return, some haven't even bothered, as yet! That being said the month was pretty exciting if not a tad wet. 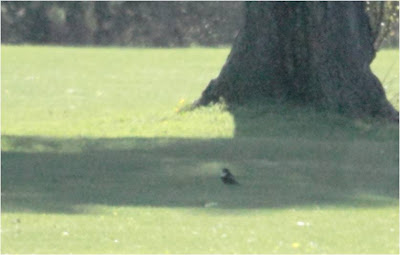 Ring Ouzels: 5 and counting (or not counting the bird I found on the Ilford Golf Course just south of the patch)
Common Redstart: an all male revue
Yellow Wagtail: heard but not seen, as per bloody usual
Unidentified large raptor: probably a Marsh Harrier, but maybe a Black Kite, Jono won't let me count either
33 Whimbrel shocker over Forest Gate
Swifts, Swallows and Martins: eventually
Hobby returns
Yellow-legged Gull actually gets pictured!
Wheatear, rather a lot of them!
Shelduck: five, 2 x 2, and a 1 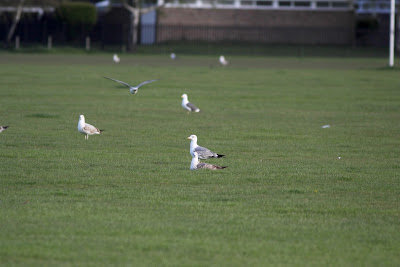 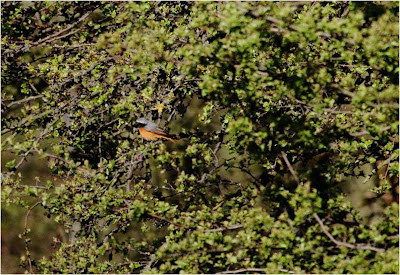 While the ducks dwindled, we bade farewell to our other winter guests, Fieldfare and Redwing. Warbler numbers of the resident birds slowly rose and their song now fills most of the places we'd expect. Some of the Chiffchaff and one Willow Warbler were not quite on script and were throwing all sorts of mimicry into the mix, but that said it is wonderful to hear the mournful cadence of the Willow Warbler back in the SSSI, currently 2 singing birds so hopefully 2 breeding birds. 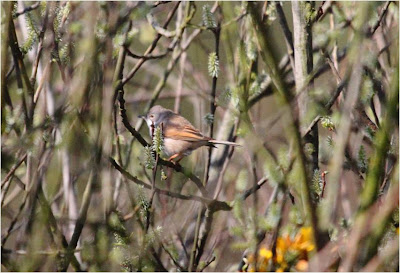 Lesser Whitethroats arrive towards the end of the month and the number of singing males stands at between 3-5, much the same as last year. No Garden Warbler as yet, but as we check out every strange singing Blackcap, it won't be too long.

Tim got the only Reed Warbler, so far, on patch, my effort was a brief singer south of the Gates of Mordor, so we wait in anticipation of Reedy to return to the Shoulder of Mutton. By the end of the month 4-5 Lesser Whitethroat were singing in various locations, and occasional showing. Tim also organised a Nightingale survey under the auspices of the BTO, needless to say no Nightingales. As for the other thrushes/chats: Ring Ouzels were found and lost, never to be seen again, but that aside most of us have got on to one or two by the end of the month and numbers were up on last year.  Wheatear figures stand at c. 80 wheatear days, which is arrived at by some strange calculation akin to the Duckworth-Lewis system and I wont go into details suffice to say a lot, more than last year, probably! Showy bird prize went to another of Tim's discoveries, a Common Redstart in the middle of Long Wood,  soon to be followed by another male the same day. The birds were probably those seen the next day further into the broom.  Only one other malewas seen during the month and no females, but numbers below last spring. No Whinchat put in appearance (subsequently seen on the 2nd May), and no Stonechat. 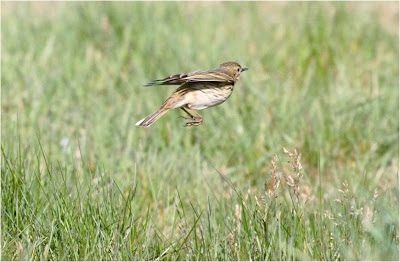 While Swallow numbers picked up during the course of the month, Sand Martins are still in very short supply.  We presume that our birds are those that nested at Bow, but since the Olympic construction is taking place around their nesting sites they might have moved on.  House Martin, always the last to arrive, have been seen both in the park and on the flats, though the residents of the Aldersbrook estate have yet to come back to home territory.  A few Swifts flew through towards month's end, but we expect their numbers to rise markedly in the coming month.

Jono had the first Hobby of the summer over his garden, and the second, while the third was briefly seen on the flats. April was a good month for Peregrine with a number of sightings, while numbers of Common Buzzard tailed off. Mystery bird of the month was the large raptor spotted flying over the park while I was unfortunately in the old sewage works.  Choosing to phone a friend rather than get my big bins out, my impression was of either a Marsh Harrier or Black Kite.  That a female Harrier was seen an hour later around Barking Bay and other sites on the river just added to the mystery, no discernible head markings of a female, I was inclined towards a juvenile (first winter) bird, but with a few sightings of Kite in the region, it too could not be ruled out.

That would have probably been the bird of the month had it not been for Whimbrel, 33 of them, that caused much gripped angst amongst my colleagues, but with potential flooding it shouldn't be too long before the next interesting wader turns up.

Rising water levels put pay to the almost daily sightings of Little Egret on the river, however 4 did turn up and inspect the golf course for the afternoon.

Back to migration and the most conspicuous of the lot were Meadow Pipit, whose numbers on some days climbed to over fifty birds passing north over the flats.  Their more colourful cousins, Yellow Wagtail, were heard on an umber of occasions, usually without being seen. Of the residents Grey Wagtail disappeared completely, and Pied Wag numbers dropped markedly, both birds breeding off patch.  Still no Tree Pipit, but then they've been in short supply everywhere. 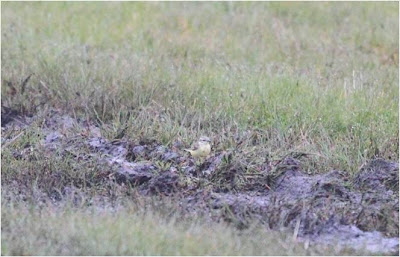 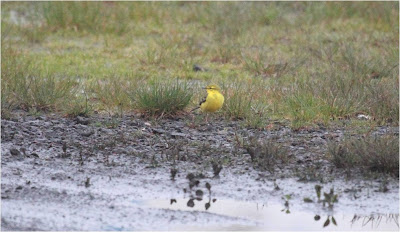 And now the rest of the news... 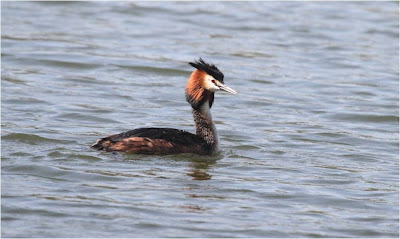 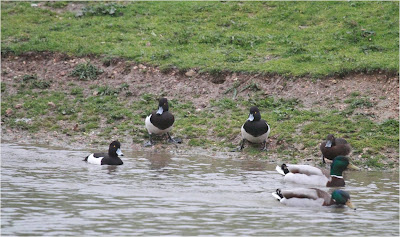 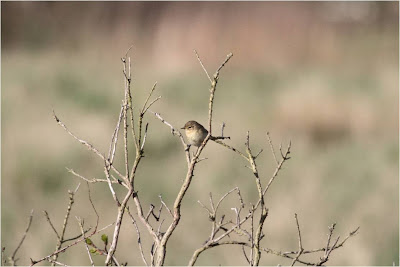 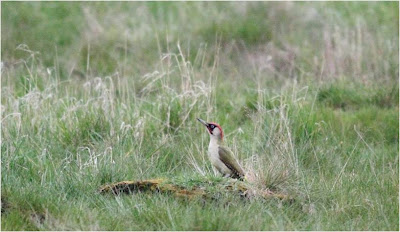 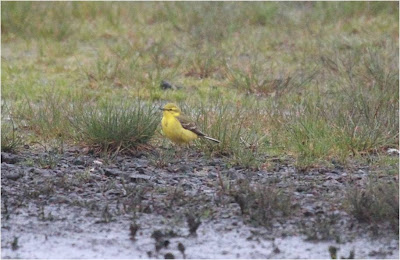 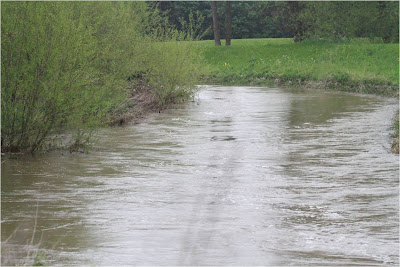 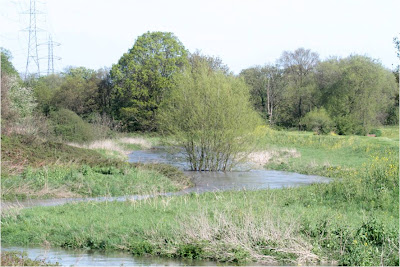 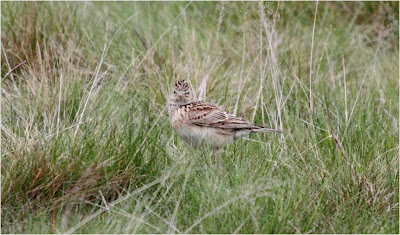