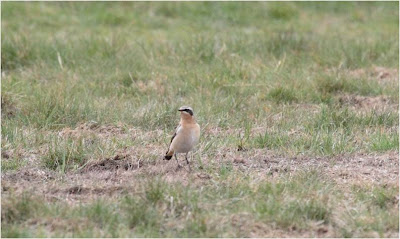 After sweating over the last blog till the early hours of this morning I was frankly knackered.  And being thus I inadvertently managed to miss the first of the Nightingale surveys, damn!  Apparently none were found, so perhaps not such a bad judgement call.

I was wandering aimlessly around in circles when Mr Fisher appeared, tanned from his visit to Turkey.  A good time was had it appears, with some cracking birds, which hopefully he will write up with some equally impressive image work on The Utter Twites. We were joined by Bob Vaughan out looking for ouzels.  We stood and chatted, which is beginning to get a bit of a habit on the flats, but likewise with the ouzel of Friday it paid dividends.  Stuart picked up a warbler flying down the path into the hawthorn. He's back all of twenty minutes and he's already picked up a bird I would have easily overlooked.

Lesser Whitethroat! Only 6 days later than last year.  It didn't call just flew around a bit and disappeared into Long Wood.

Nothing else was happening on the flats so I made my way over to the park, specifically for some late breakfast, while Stuart re-united himself with the Alex.

By the Heronry a bird sang, this happens a lot, but in this particular case it the song contained a whole heap of interesting warbler flourishes and melodies.  It was a Blackcap, but one that point blank refused to sing blackcap.  It did me last time I passed the same bush several days ago, there's one in the old sewage works which had me staring at the brambles for about ten minutes before its true identity was revealed. Of course we have to do this just in case its a Garden Warbler or something more interesting, and the songs themselves are really quite beautiful.  It seams this year all the songsters are into sampling in a big way. 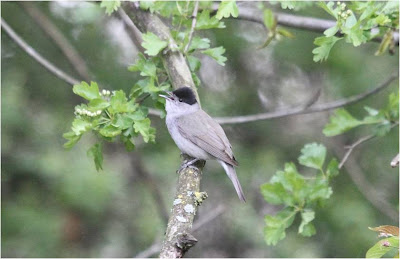 After a coffee and a slab of fruit cake I staggered off round the plain, and over to the old sewage works. Here I was greeted by the dd-dd-d of another Lesser Whitethroat, and the scratchy song of a number of Commons - one even carrying nesting material, where there had been none the day before.

A couple of Large Whites flitted about, looking rather smart, giving a good comparison between the sexes, and an Orange Tip, which eluded my clumsy attempts to stalk it. I think we should add a butterfly page to the blog. 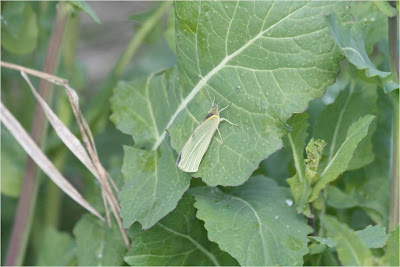 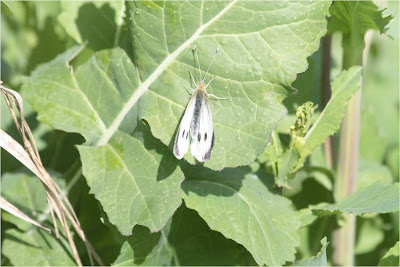 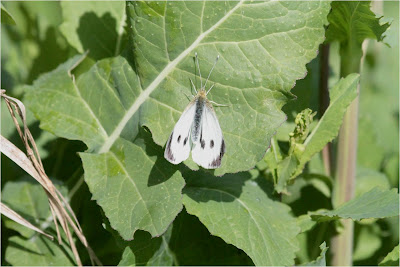 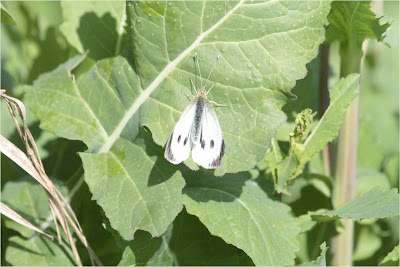 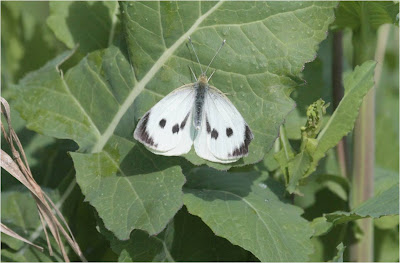 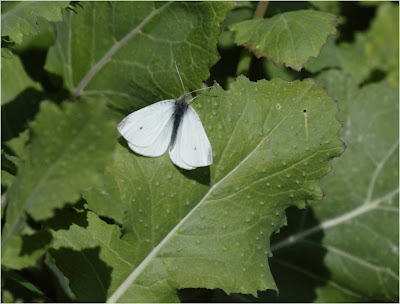 Mute Swans appear to be trying to nest below on of the golf tees, anymore rain and they may have to think again as the river level was quite high.

Quite frankly I had had enough and wanted my bed, continual early mornings and late nights are grinding me down, so I pushed on to the Alex on the way home. The crowds had stayed away and the chippy was open so I got myself some comfort food and sat down for lunch.

A couple of  Swallow swept west and with them a House Martin. Interesting! I had vowed to stay out today until I'd got a Sand Martin, so now I better stay put. Half an hour later I got a glimpse of a martin like bird as it disappeared over the trees.  On the other side another House Martin, but this time its companion was a Sandy. About friggin time!

Now all I need to come past are a Common Sandpiper, Swift, Hobby.... 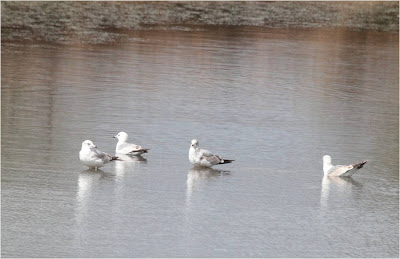 Having used up all my luck I wandered back to the broom fields, and since no one was about, wandered around in circles for a bit for old times sake.

The constant pictures of Meadow Pipit? just in case one isn't! 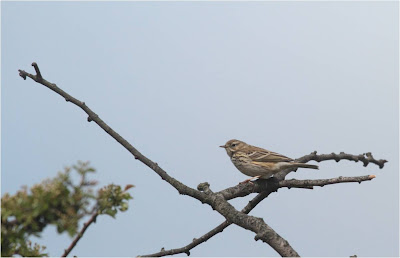