This is the first winter that the local birders have been collectively capturing their notable records using the eBird online platform. Some of us use the platform personally, but this new team account will hopefully make retrospective reports - like this one - a little easier and allow us to track and compare changes in the data over time more successfully. This report covers the winter months of December to February - each in full.

We recorded a total of 87 species over the winter (74 in December, 78 in January - I believe our best start to a year ever, and a pretty decent 83 in February).

The tables interspersed here are a collection of some of the records we have on eBird for select species. The 'bird days' column is the most likely to be mis-interpreted. Many of these species will have been present every single day, but the bird days simply correspond to days when birders reported their records.

A big highlight was undoubtedly the fact that we joined much of the country in getting closer to White-fronted Goose than normal in December. Until then, I had only ever seen one flock pass over on the patch in the past 6 years. We had a long staying bird (of the Russian subspecies) that was joined by a second on 18 December and they both remained, to the immense relief of those of us who keep a year list, until 1 January when they departed for the last time (one of them relocated a couple of miles west at the Walthamstow Wetlands where it remained until 6 Jan).

The Goosander on Perch Pond on 28 December was a patch tick for many of us, but things just got better. The drake was joined by a second male on 31 December and, then, at least 7 birds were seen on 1 January (there was a bit of movement hence the uncertainty). A single drake was reported on 2nd, 7th, 12th, and 16th January and then two birds on 24 January so quite an extraordinary period for this previously patch-rare bird.

Most of the other highlights were associated with the early-February cold-snap (or the mini 'Beast From The East' which certainly shared a number of similarities with its meteorological namesake from three years ago).

As the cold weather front came in from the continent, the bird sightings began with a single Lapwing circling the football pitches on Sunday 7 February. Then, just off-patch sadly, but still worth a mention, I had a flock of 5 vocal Redshank fly over my house in Leytonstone (a real local rarity). These birds were heard some time before they were seen over the rooftops and I strongly suspect that they were circling over the Western Flats (just a couple of minutes walk from house), or even had come up off the ground. I then continued to hear calls even after they had passed over which suggests they circled back round again or there were more birds which I didn't see.

As temperatures continued to fall, the frozen ground pushed increasing numbers of birds in search of feeding areas. In the week from Sunday 7 Feb to Saturday 13 Feb, we had an astonishing 1593 Lapwing pass over (only six fewer birds than we recorded during the 'Beast' in 2018) and with our peak day on Monday 8 Feb with 565 birds. If Lapwing are the 'cake' of eastern cold fronts, then Golden Plover are the icing. Nine birds were seen on 12 Feb and a single bird was seen on the following day. The cold weather also brought a record 12 Snipe (including a single flock of 10 on the Fairground/Police Scrape on 8 February) and a Shelduck to Jubilee, and occasionally Alexandra, lakes. This rather tame individual is the first of the species on the deck for some time. It remained throughout February and into March (as at time of writing).

But, to continue the analogy, if Lapwing and Golden Plover were cake and icing, then the cherry on the top was a Kittiwake on Alexandra Lake on 9 February. Found by Richard Rae, this was the first patch Kittiwake since 2014 and was a patch tick for many of us. The clearly exhausted bird stayed long enough for all the local regulars to get a good view before, hopefully, heading back out to sea.

Many of us struggled to concentrate on working from home as cloud-shaped flocks of Lapwing floated past - mostly heading west or south west - and occasionally settling briefly on the ground to test their luck or perhaps out of exhaustion.

Whilst wonderful to see these birds, it is bittersweet at best as sadly many of them will likely not have made it back to where they came from. It is a reminder that cold weather is often little more than an inconvenience for many of us; but it is literally life and death for large numbers of birds and other organisms.

Duck numbers have been shockingly low this winter; particularly in the Park where we have previously had many hundreds of Gadwall and good numbers of other duck. We are not sure what has caused this fall, but perhaps a water quality test of the lakes is due again? Shoveler and Teal both had high-counts of 28 and averaged only 10 and 4 respectively per day that they were recorded. Gadwall averaged 5 birds per day with a high count of 42. The day of the Kittiwake (9 Feb) was also the only day this winter that we have had Wigeon on the patch; nine birds on Alex only present for a few hours. Some of the waterfowl numbers have been crunched in the table. 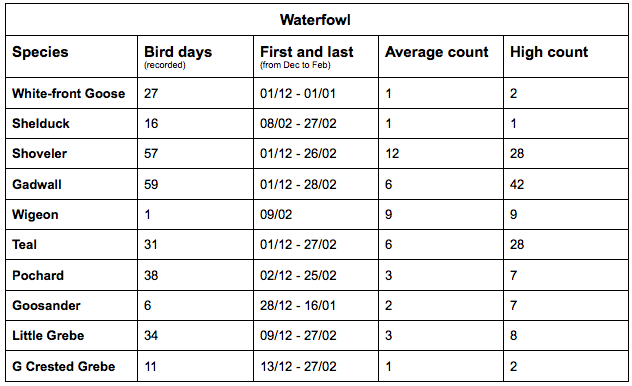 There have been three reports of Caspian Gull on Wanstead Flats this winter although sadly not with any photos - on the 26 Dec, 11 and 14 Jan.

We have been lucky to have a very long-staying 1st winter Mediterranean Gull found on 19 December and still present at the time of writing. On the 19th and 21st we actually had two Med Gulls (actually causing a bit of confusion on the first day they were here together).

We have also had Yellow-legged Gull appearances sporadically through the winter with a maximum of two birds (an adult and a 2nd winter) on 7 February. It was also on this day that we had the highest count of gulls overall; extensive flooding and cold front meant we had heavily inflated numbers of gulls on the pitches (which more resembled pools at the time). We made a rough count of at least 1800 Common Gull and over 1000 Black-headed Gull with three figures of Herring and Lesser Black-backed Gull.

Other birds or numbers of note

We always have one or two wintering Chiffchaff and Blackcap and this season was no different. A single Chiffchaff was encountered a few times in the Old Sewage Works through December. The first Chiffchaff of the new year was only seen briefly by Cat and Dog Pond on 6 January and there was then a gap until 28 January when one was picked up in the Old Sewage Works. Since then, it/they have been encountered more frequently (although never certainly more than one bird a day) and we have had one singing by the stables. It is a similar picture with Blackcap although wintering birds seem more frequently found in adjacent gardens to the Patch than in key habitats centrally. 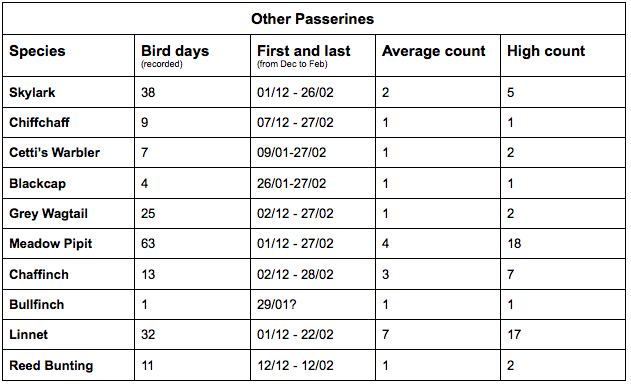 There have also been four day's worth of sightings of Firecrest in Bush Wood.

Skylark began to be consistently seen or heard by around mid-January and in February we have had a high-count of five birds and at least 3 singing males.

Throughout December and January, we have had two pairs of Stonechat over-wintering; one pair by Cat & Dog pond (helping to entertain those working on restoring the pond to a more appealing habitat), and another mainly found around the south Brooms area and Angell Pond. However, by mid February, these wintering birds had departed and were almost immediately replaced by some others on passage (we had a winter high-count of 7 on 20 Feb) and then a single longer-staying female in the Brooms until 27 Feb. This has been a good winter for Stonechat on the patch and follows our record-breaking Autumn (a high count of 16 birds on 7 October).

Two of our finch species are worth noting. We have consistently had a good flock of Lesser Redpoll with up to 40 birds being counted on numerous dates; mostly in the SSSI, but often, later around Alex and a/the same flock of c26 birds by the Roding in the Old Sewage Works on 21 February.

We consistently get a flock of Siskin frequenting the Alders at either end of Perch Pond in the Park. This year's winter flock was first noted on 10 November and we had a high count of 29 birds on 1 January. The flock was last reported on 31 January although a visiting birder did report 2 Siskin in the Park on 12 February.