Lesser Whitethroat - a visitor from the East? 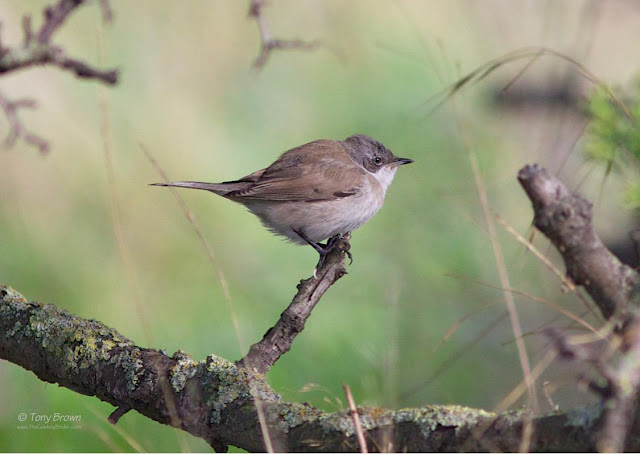 The focus for patch birding on Sunday (25th) was to re-find the previous day’s Corn Bunting, but just after 8am plans changed. I started my typical route of Alex Pond at first light followed by a quick walk up the Ditch of Despair and into the area known as Brooms. This is where a Corn Bunting had been photographed the previous day but overlooked until the days images had done the rounds on WhatsApp and Facebook. The weather wasn’t great with plenty of drizzle and occasional heavier showers, but a few of the local patch birders had commenced bunting hunting. I’d checked all the Broom patches and was moving between the various shrubs that might provide a suitable perch for a bunting. There were several movements from the centre of one small hawthorn bush so I spent a bit of time trying to locate the culprits. After a few minutes a Wren flew out to the adjacent Brooms, and then a Blue Tit, but nothing emerged from one particular spot where there had been some movement. I don’t know why, but I waited, and waited and then got a very brief view of what I was pretty sure was a Lesser Whitethroat head – just the grey head, the white throat, fine bill and typical jizz of a small warbler. Given the time of year my immediate thoughts turned to an ‘Eastern.’ It didn’t fly off but retreated back into the centre of the bush. Bob and a few others were nearby and I went to let them know that I was pretty sure there was a Lesser Whitethroat in the bush – In unison Bob and Jono asked “was it an Eastern?” News spread fast and James sent a message via the Whats App group that this is our latest Lesser Whitethroat record by 22 days.

So, back to the bush. The bird was still playing hard to get, presumably in part due to the light drizzle, but as a sunny spell broke, the bird popped out into a partial, and then full view. It was a Lesser Whitethroat - credibility still intact! The back was clearly light/sandy brown in colour on the back and this did appear to stretch right up to the nape. There did appear to be some subtle buff coloration in the flanks. I got a very brief view of the tail feathers and whilst I couldn’t be certain there was definitely a hint of white – the question was how much? Jono and Bob managed to get some photos but none that conclusively showed the extent of white in the tail – extensive white in the outer feathers is a feature of an Eastern bird - blythi (Siberian Lesser Whitethroat) being the most likely of the races to occur, although halimodendri (Central Asian Lesser Whitethroat) can’t be ruled out (there are 8 records for Britain all confirmed by genetic analysis*). Scrutinising the initial photos the extent and tone of the brown coloration on the upperparts were looking good for our bird to be a visitor from the East – this wasn’t a lingering breeder that had gone undetected for a few weeks.

Below: some of the first good images by Jono that we were able to view in the field that suggested an Eastern bird (Jonathan Lethbridge).