Last Days of May 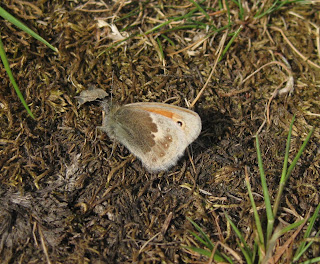 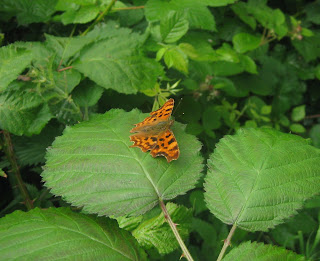 A couple of snapshots of Small Heath on the Flats and Comma in the Park.
Visited the Park today after work looking for Hobby which is strangely eluding me so far this year but instead got a Red Kite flying south persued by a Carrion Crow. The male Willow Warbler was singing away near the Ornamental Waters. Several broods of Blackcap could be heard, yesterday on the whole site I counted 33 birds (adults and juvs). I also noticed a Swallow still lingering around near the Jubilee Pond for the 3rd day running.
Posted by Stuart Fisher at Tuesday, May 31, 2011 No comments:

A nice walk around the Park and Flats with Nick today where the highlights were tea, sandwiches and cake at the Teashop of Happiness and Reed Warbler at the Shoulder of Mutton, 2 Little Egret east, 1 Swallow north west and a Spotted Flycatcher flew over SOM into Reservoir Wood and this Red-breasted Goose on the Alex...yep definately a wild bird, description on its way
Posted by Stuart Fisher at Sunday, May 29, 2011 No comments: 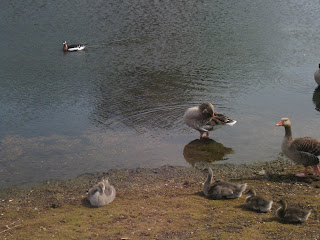 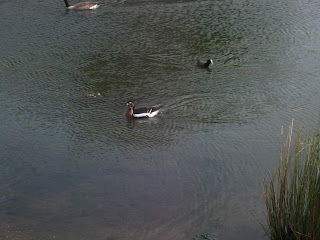 We're not dead, but the patch is.

So that we at least post something in May, which has been hugely disappointing on the migrant front, here is semi-update. In a nutshell, the summer (traditionally the poorest time for observing bird activity) has come very early. I may be talking out of my backside, but essentially the high pressure system and southerly winds that have dominated most of this month have allowed migrating birds to happily soar straight over our heads and onward to their breeding grounds without us getting a look in. C'est la vie I suppose, and from a personal perspective, constant sunny days have been gratefully received - I'm looking very healthy. 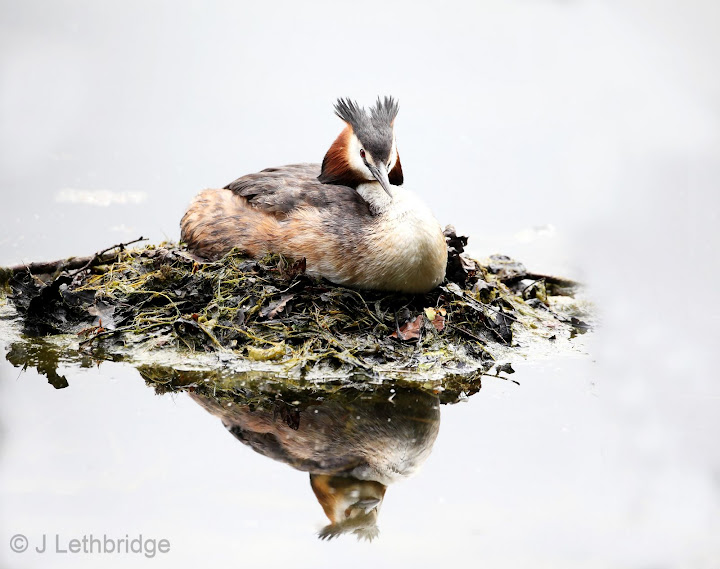 However, what we may be lacking in exciting passerine migrants, we are making up for with resident breeding birds, and that's what people should be looking out for at this time of year. Let's face it, there's nothing else to see! Anyhow, there are a few breeding successes to report so far. Most in evidence are Starlings which seem to have had a good year - look for browny-beige ones, they're the juveniles, and they seem to be everywhere. I've also seen goslings of both Canada and Greylag, Mallard ducklings, Coot and Moorhen chicks, as well as fledged Blue Tits, Robins, Pied Wagtails and Blackbirds. Happy days!


Posted by Jonathan Lethbridge at Friday, May 27, 2011 No comments: 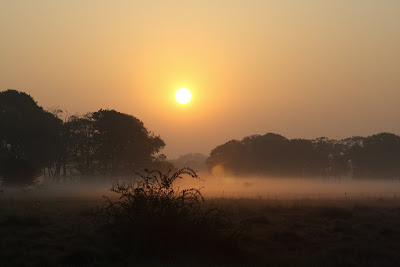 April started with crowds descending on the patch to get their Lesser Spotted Woodpecker ticks for the year, before the canopy closed in. 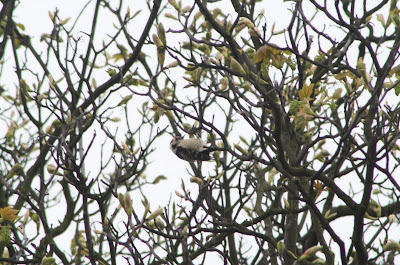 The last of the Snipe was flushed and the first of a sadly disappointing spring influx of Redstarts occurred on the 2nd; with that male were the only other 2 Ring Ouzels to be seen on the flats (the other being seen in the park by Mike Messenger). Grebe sex was happening on Heronry, which brought about two eggs by the end of the month and amusing Google searches. Wheatear numbers held up throughout the month with only a few days lacking the preferred bird of spring. By the end of the month well over 30 birds had been noted. 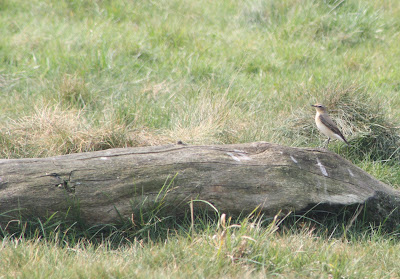 By the 4th the last Fieldfare (a bird in the old sewage works) had fled north, soon to be followed by the remaining Redpoll and Siskin. The morning of the 5th was pretty nasty wet and cold and brilliant for birds. First a Brent Goose toying with the idea of joining the Canadas on Alex but then deciding the better of it, and the first patch mega this year: a Stone Curlew flew south straight up the central pathway. Well that was it, presumably, but remarkably the same bird did a repeat performance the next day allowing JL to get it on his patch list as well. We'll ignore the fact that he had us standing looking at a log for hours well after the bird had presumably left the field. Consolation came in the form of the first Common Whitethroat singing in the SSSI and a circling Peregrine (a daily event at the time).

The 8th brought the first of the troublesome Tree Pipits, a record of a Nuthatch calling in the park and another sighting of the Coat-hanger Goose and a (not a) Nightjar nightmare for ST. 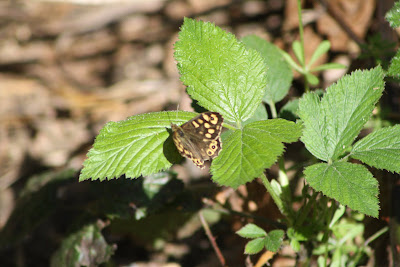 A single Lapwing over the flats on the 9th made Jono's day and was the last of the spring passage (currently), by this stage of the month gull numbers had so declined that small flocks of Black-headed Gull were an "event". By the 18th Lesser Whitethroat had joined their nosier and commoner cousins and the first Yellow Wagtails were not seen, just heard, as usual! Meanwhile in the SSSI the Willow Warbler had stayed for longer than any previous bird raising hopes that perhaps it would again breed in the birches. 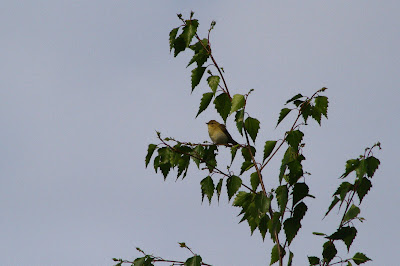 The 19th brought the year's second mega, if it can be called that, in the form of a very showy and confiding Wood Sandpiper on of all places the rapidly evaporating bandstand pond. I've said it before and I'll say it again, best views I've ever had. To make a good day better, I was on holiday and there was a female Redstart at the east end of Long Wood (bringing my ton up for Wanstead, yay!). 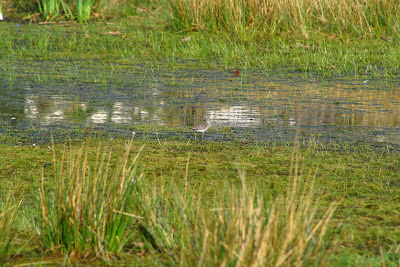 Things were bound to disappoint after virtually all our returning birds had been ticked off, but the arrival back of the Reed Warbler on Shoulder of Mutton put a smile on faces, especially as by the end of the month he'd pulled. Go on my son!

The first Whinchat, and in fact the only Whinchat, appeared on the 24th, stayed for the 25th and then departed. At the same time the first Garden Warbler had me and then Jono wandering around bushes for longer than is seemingly decent on the flats, before giving brief but telling views.

A few days later and Hobby had joined the list, first a pair of the garden of one J Lethbridge, and then later singles over the flats and in the park. Meanwhile House Sparrows had taken a liking to the broom fields, with dozens to be found foraging in and on the flowering plants. And finally when it seemed that everywhere else was getting Swifts and not us, they finally squeaked in by the end of the month. 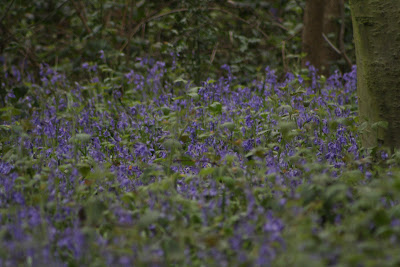 Conclusion: a good month, perhaps May will bring Whinchat numbers and some viewable Tripits, but there's a nagging feeling that June might be starting early! 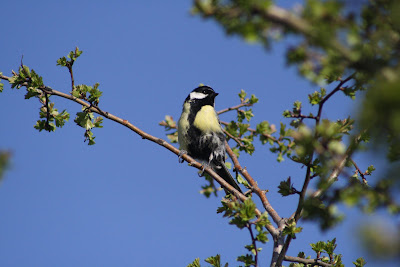 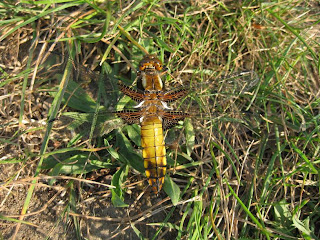 My first day back at Wanstead after being away for a while produced this freshly emerged female Broad-bodied Chaser that I managed to get close enough to get a pic. Not usually an easy task. 4 Swifts went east over the park, then later another 2 also east. A few Swallows passed in various directions throughout the 3 hours I was there, including one heading South East. A pair of Reed Warblers were in the small reed patch at the edge of the Shoulder of Mutton pond, hopefully they'll breed this year(?) Drumming Lesser Spotted Woodpecker near the Dell, singing Coal Tit (I've forgotten where) and on the Flats a Yellow Wagtail flew off east from the largely empty playing fields, nice. also noted 2 singing Lesser Whitethroats, a male Garden Warbler singing near Centre Road, 3 Willow Warblers, 1 in the Park, 1 along the Roding and one on the Flats, also a Kingfisher carrying a fish along the River Roding (nest site?).....
Posted by Stuart Fisher at Sunday, May 01, 2011 No comments: